You could be quite forgiven if your initial reactionÂ upon discovering that new champagne house Fleur de Miraval was co-founded by A-list celebrities Brad Pitt and Angelina Jolie was to groan inwardly (from Jay-Z to Cameron Diaz, Sarah Jessica Parker to Post Malone, A-listers seem particularly drawn to acquiring wineries, with mixed results). However, just as Brad and Angelina themselves aren’t just any old celebrities (this is Brangelina we’re talking about, after all), Fleur de Miraval is “not just some new celebrity wine” as the house itself candidly put it, but “an authentic project of wine growers combining their expertise, skills and passion.”

Indeed, the leading cast of winemakers involved in this five-year “secret” project have serious credentials, and Brad and Angelina themselves are no novices when it comes to wine production. In 2012, the then-couple joined forces with the distinguishedÂ Perrin family of ChÃ¢teau de Beaucastel in ChÃ¢teauneuf-du-Pape to createÂ ChÃ¢teau Miraval, which, despite its short history, has already established itself as an acclaimed producer of Provence rosÃ© (ChÃ¢teau Miraval is still co-owned by Jolie-Pitt and will one day be entrusted to their children).

Earlier this year, it was announced that the Miraval co-owners (Brad, Angelina, and Marc Perrin)Â had partnered with another great winemaking family – the PÃ©ters family in Champagne – to begin a new project.Â The PÃ©ters family, based in the famous Chardonnay region of Le Mesnil-sur-Oger in Champagne’s CÃ´te des Blancs, is internationally renowned for its blanc de blancs style of champagne, Pierre PÃ©ters, which it has produced from its own grapes since 1919.

Today, Rodolphe PÃ©ters runs the 50 acre estate. Rodolphe has long been a fan of the wines of ChÃ¢teau de Beaucastel and is close to the Perrin family. “We have known Rodolphe PÃ©ters for many, many years and, like him, we are passionate about the great wines of the world,” explains Marc Perrin. Close friends, Marc and Rodolphe have tasted many of theÂ worlds best wines together over the years, “yet, each time we’ve gotten together to taste fine, vintage rosÃ© champagnes,” Marc explains, “we’ve come to the same conclusion: We love the aromas that these great champagnes develop with age, especially when they lean towards Chardonnay, but we often also find heavy aromatic notes from the red wine, which create an overall conflict with the harmony and nobility. This is why we wanted to create a different kind of rosÃ© champagne that blended mature Chardonnay grapes with young Pinot Noir grapes.”

And now, five years after they began, Fleur de Miraval (a union of the Jolie-Pitt, Perrin, and PÃ©ters families) are finally ready to reveal the fruits of their labours to the world. We met with Marc and Rodolphe at the launch in London in late-October (no sign of Brad or Angelina, unfortunately), to taste this exciting new release.

Being the only Champagne house dedicated solely to the production of rosÃ©, it is perhaps unsurprising that Marc and Rodolphe have become masters of their craft. They were keen to drive home the message that Fleur de Miraval is not a marketing venture (the house has no Marketing Director, though, with the world’s most famous ex-couple at the helm, they arguably don’t need one), it is driven by a passion to create the best rosÃ© champagne. “We made a wine to please our taste and not the market,” Rodolphe told us.

The blend is 75% Chardonnay and 25% Pinot Noir. The red grapes were sourced from Premier Cru-rated Vertus and the phenolics were extracted using the notoriously difficult saignÃ©e method, whereby theÂ juice is left in contact with the skin of the grapes for a short time during fermentation (as opposed to “simply” adding a small proportion of red wine to the blend). The pair were adamant that they did not want to blend red wine, as the bitterness found in Chardonnay from the CÃ´te des Blanc often doesn’t match the tannins in red wine. TheÂ rosÃ© de saignÃ©e technique is the same method used to produce Provence rosÃ© at ChÃ¢teau Miraval.

The challenge with the Chardonnay, we were told, was “how to build from scratch.” In the end, they blended three types of Chardonnay: 25% from the 2016 harvest (predominantly Le Mesnil, but also other villages in the CÃ´te des Blancs); 25% from Rodolphe’s perpetual reserve system (which has wines from 2007, 2008, 2012, 2013 and 2014)Â to give some micro oxidative flavours with lees ageing; and 25% from seven-year-old Blanc de Blancs purchased ‘sur latte’ (an expensive and cumbersome process which involves uncorking and emptying the bottles into a tank where the wine is then de-gassed and added to the base wine blend).

The origin of the grapes was of particular importance to the Fleur de Miraval winemaking team. All the fruit is sourced from the chalky soils of the CÃ´te des Blancs, a region which, exposed to the sea breeze from the south-west, lends a favourable iodine bitterness to its grapes. Similarly, Vertus is considered by Rodolphe to be “the best place for Pinot Noir in the CÃ´te des Blancs” as it has much deeper soils, often flint clay and less chalk based, and more south-facing vineyards.

After blending, this – in Rodolphe’s words – “crazy assemblage”, was bottled and aged on the lees for three years. Disgorged in June 2020, it was finished with a dosage of 4.5g/l – a figure they came to after many trials; “too little [dosage] made it too sharp, and too much made it too heavy.”

Refreshingly, Marc acknowledged the issue of lightstrike in champagne (damage caused by exposure to ultraviolet lights). Having already bottled in clear glass, they made the decision to lacquer each bottle to protect the wine, though in future they will bottle in dark glass.

Production is extremely limited – hence the name, Exclusivement RosÃ©. Just 20,000 bottles were produced and there apparently wonâ€™t be more as they donâ€™t have the capacity, mainly due to the availability of grapes. 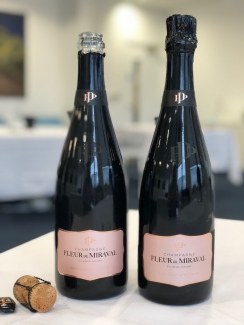 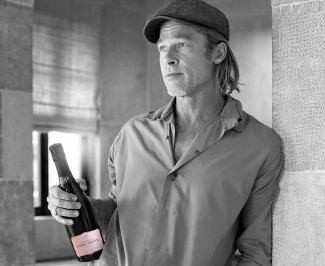 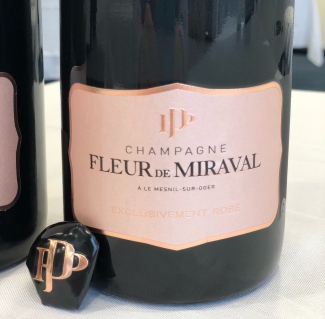