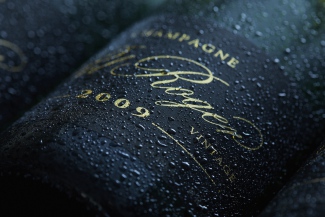 Almost exactly a year after the extravagant release of celebrated Pol Roger 2008, the house are ready to launch the next vintage:Â Pol Roger Brut Vintage 2009.Â We tasted it in London this week and, as we strive to do with all new releases, tastedÂ the previous vintage alongside for comparison.

Pol Roger 2009 is a testament to the house’s traditional tried-and-tested production method: a 60% Pinot Noir, 40% Chardonnay blend of grapes sourced from twenty Grand and Premier Cru vineyards in the Montagne de Reims and CÃ´te des Blancs, aged for eight years in the cellars before disgorgement and release. Any champagne would face a serious challenge going up alongside Pol Roger Brut Vintage 2008Â – which the house have claimed is their greatest ever vintage – so we approached the new 2009 as objectively as possible.

After a cold winter, the 2009 growing season was surprisingly warm with a particularly sunny and dry August lending the vintage its label of a ‘hot one’.Â This favourable weather pattern is evident in the champagne, which is full of rich and ripe fruit flavours that strike the palate immediately. Surprisingly, there is a sweetness that makes the acidity seem quite soft. The dosage in Pol Roger vintage champagne has reduced from the 8 g/l traditionally added in the 90s, to the 7 g/l that has been added to the previous three releases. However, the sweetness inÂ Pol Roger 2009Â seems a little dominant, leading us to muse whether it would have benefited from a further reduced dosage? 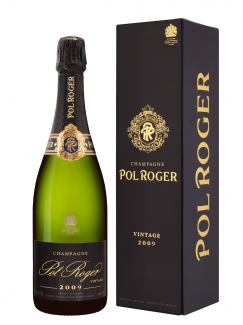 That said, this is a delightfully fresh and fruit-forward champagne. Similar in style to Pol Roger 2004, it is delicate and round, a palate-pleaser for any taste.Â Pol Roger Brut Vintage 2009Â will be available to purchase soon.

Pol Roger Brut Vintage 2009
60% PN, 40% CH | Ageing: 8 years on the lees | Disgorged: June/July 2017 | Dosage: 7 g/l
Lots of rich, ripe lemon and juicy apple notes. Delicate pear on the nose and some of that chalkiness and grapefruit texture. Seems to have a hint of sweetness that makes the acidity seem light, but its quite fresh. Going back, you get more peaches and aromatics, like white blossoms and some banana character.

Pol Roger Brut Vintage 2008
60% PN, 40% CH | Ageing: 8 years on the lees | Disgorged: October 2016 | Dosage: 7 g/l
Initially very tight and chalky on the nose, has a lot of power of fruit and some of the creaminess and yeastyness seem more apparent than on launch. Acidity seems very steely and chalky but with plenty of fruit: lemons, grapefruit, ripe red apples. Great freshness – leaves the palate clean.