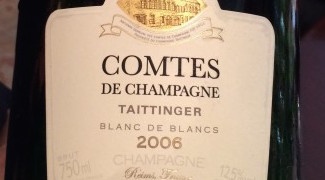 Despite being a brand new release, Comtes 2006 has already been lauded by the world’s leading wine critics as one of the best Comtes vintages ever. Tasted by both Antonio Galloni and Jancis Robinson MW earlier this summer, they were both similarly impressed, scoring it 97+/100 and 18/20, respectively.

As highlighted in our Taittinger Comtes de Champagne 2006 Investment Page, Comtes has always displayed excellent value for money. Truly magnificent Blanc de Blancs are hard to come by – a reflection of the rarity of great Chardonnay vines in Champagne – and Comtes, a pioneer of Blanc de Blancs prestige cuvées, is a steal when compared to its closest rivals; Salon le Mesnil and Krug Clos du Mesnil (which both fetch well over £300 per bottle).

The winemaker describes the Chamapagne as “supple, full-bodied and rich” with a “lively attack” and “a hint of spice, reminiscent of liquorice sticks”. Although we may not be as effusive with our adjectives, we at The Finest Bubble were certainly blown away by this release. Lucky enough to be invited to a pre-launch tasting of

Taittinger Comtes de Champagne 2006 in early September at Roux at Parliament Square, we were both surprised and delighted to be offered a glass of Comtes 2006 as soon as we walked through the door – what a way to start an evening! (Take note, other Champagne brands…)

Light and refreshing, it is at once intriguing on the nose, with mature notes of ripe fruit and raisin. Well balanced on the palate with incredible complexity, its dosage of 9 g/L is evident in its full bodied, yet sweet richness. This is an exceptionally pure expression of Chardonnay that is delicious now, but promises exciting development over the coming years.

Second only to 2002, the 2006 vintage is now undoubtedly positioning itself as one of the vintages of the decade – certainly every example we have tasted thus far has been stunning, and this latest release is no exception. Interestingly, Clovis revealed that Taittinger will follow up with Comtes de Champagne 2007 and 2008, but won’t be making any Comtes from 2009, 2010 or 2011 vintages due to unfavourable conditions. Commenting on the fact that Comtes is made more frequently today than it was in the past, Clovis said: “Today it’s not so unusual to make three prestige cuvée vintages in a row. With global warming and more consistent harvests, it’s easier to make now than it was in the ’80s and ’90s.”

It’s worth noting that Comtes de Champagne is released in limited quantities – less than 25,000 cases are produced of each vintage – and magnums are especially hard to come by. Less than 200 magnums of Comtes 2006 have been released to the UK market and The Finest Bubble are fortunate and proud to be able to offer small quantities of Comtes 2006 in magnum. His father, Pierre-Emmanuel Taittinger said: “2006 represents the first vintage made in my presidency, when I took over Taittinger with my son, Clovis, and daughter, Vitalie.”

“Very fine bead. Tight, focused nose. Very introvert, taut palate.  I have just been tasting Trento fizz and the energy and introversion of this wine is notable by contrast. Very much a Blanc de Blancs in its lean, clean, sleek format. Very tight. This doesn’t really seem quite ready although I’m sure it will bloom into a great wine. Very contained; the opposite of flamboyant.” – 18/20, Jancis Robinson MW, August 2015

“The 2006 Comtes de Champagne is striking, especially in the way it brings together elements of ripeness and freshness in a hypothetical blend of the 2002 and 2004. Smooth and creamy on the palate, the 2006 is all about texture. There is a real feeling of density and weight in the 2006, qualities I expect to see grow with time in the bottle. All the elements fall into place effortlessly. The 2006 has been nothing short of magnificent both times I have tasted it. Comtes de Champagne remains the single best value (in relative terms) in tête de cuvée Champagne. I suggest buying a case and following it over the next 20-30 years, which is exactly what I intend to do. There is little doubt the 2006 Comtes de Champagne is a magical Champagne in the making.” – 97+/100, Antonio Galloni, July 2015

Taittinger Comtes de Champagne 2006 will be available to purchase on The Finest Bubble website within the coming week. 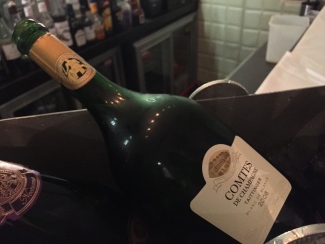