Last week, we attended the official launch of Taittinger Comtes de Champagne 2007at award-winning restaurant The Frog in Spitalfields, London. Being nearly three years since the last Taittinger prestige cuvÃ©e release –Â Comtes de Champagne 2006 was revealed in September 2015 – this was an important occasion and both current President Pierre-Emmanuel Taittinger and new Chef de CaveÂ Alexandre Ponnavoy were there to present the launch.

Since the first cuvÃ©e in 1952,Â Comtes 2007 is the thirty-seventh vintage produced and marks the fourth consecutive release since Comtes 2004.Â Ponnavoy, who has been working as assistant to Chef de Cave LoÃ¯c Dupont for the past four years, began with an overview of the season. “It was a surprise year… following a warm winter, the buds started early and the harvest was consequently early,” he said. Although many were predicting a mid-August harvest, difficult weather in May disrupted the flowering period, so the grapes matured a little slower and the harvest officially began on August 30th.

Freshness, acidity and complexity are central to Comtes 2007. The simple vinification process – only the fist press juice is used (the cuvÃ©e) andÂ 5% of the wines are matured for four months in fresh oak barrels – is the key to keeping the freshness, according to Ponnavoy. Although the vintage was lacking somewhat in juicy fruit, it had plenty of acidity and this shows in the finished champagne. Fruit-forward and already quite complex with a nice salinity on the finish, Comes 2007 is tasting fantastic now and will age well for a few more years yet.

Comtes de Champagne is always a blend of five Grand Crus in the CÃ´te des Blancs: Avize, Cramant, Chouilly, Le Mesnil-sur-Oger and Oger. Asked why just five Grand Cru villages are used and why the price isn’t higher, Pierre-Emmanuel commented: “I don’t want [Comtes] to be a champagne for billionaires and I don’t want the connoisseur being unable to afford it.” Cheers to that! 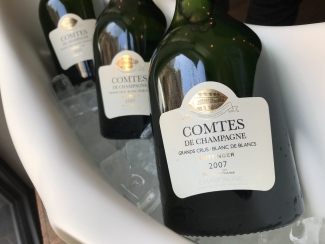 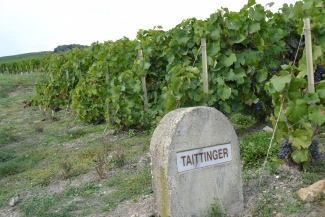 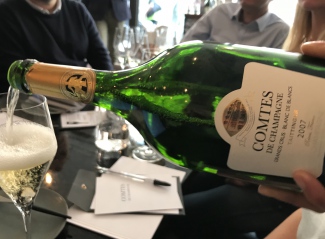 Freshness, acidity and complexity are key to Comtes de Champagne 2007