The Philipponnat family are one of the oldest names in Champagne. However, despite their long heritage (they have owned land in the famous village of Aÿ for more than five centuries) it took until 1910 for Champagne Philipponnat to be officially founded. The house grew quickly since then and is now proprietor to seventeen hectares of vineyards in the villages of Avenay, Aÿ and Mareuil-sur-Aÿ.

We met with sixteenth generation family member Charles Philipponnat (who has been managing the house since 1999) at the grand estate in Mareuil-sur-Aÿ to learn about the 2017 vintage. Alongside a fascinating range of vins clairs, we also tasted some reserve wines and finished champagnes, including a trial disgorgement of the latest vintage of their prized cuvée: Clos des Goisses 2009.

Charles began by describing 2017 as a “funny vintage… some rot, also rainy and humid, but very ripe.” The team at Philipponnat quickly decided not to make any vintage champagne apart from Clos des Goisses. Charles told us that, due to the relative strength of the Chardonnays over the Pinots, they “could have made a Blanc de Blancs” but decided against it as “the reputation [of 2017] will be so bad.” 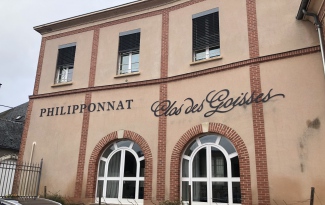 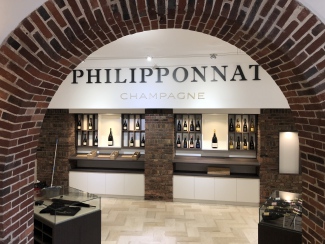 The newly renovated interior at Philipponnat 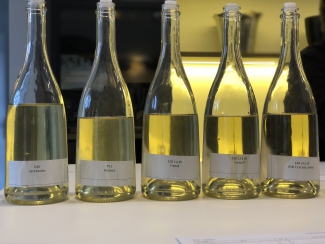 We began our vins clairs tasting with the best of the vintage: the Chardonnays. Remarkably, Charles informed us that Philipponnat did not find rotten grapes on any of their Chardonnay parcels. “The Chardonnays this year are at least as good as normal,” he said. Particular standouts were Grauves – a village which Charles says is “just as good as Le Mesnil”, and Clos des Goisses – which had a nose so impressively aromatic and floral that fellow guest Simon Stockton commented that it “could be worn as a perfume”.

Next, we tasted a selection of Pinot Noirs. The first, Venteuil, was the village most affected by botrytis in 2017. Unfortunately, this was quite evident when tasting the wine, which had a musty, mushroomy characteristic, which Charles referred to as a “veil of dust”. The second, Vertus, had been stirred with Chardonnay lees, in order to reduce the effects of botrytis. Charles told us that, in years that favour Chardonnay, Philipponnat frequently treat the less expressive Pinot Noirs with Chardonnay lees to add complexity and produce a cleaner wine. This was not only obvious in the lighter colour, but also in the delicate and more elegant palate of Vertus.

In 2017, Aÿ and the surrounding villages were some of the worst affected by botrytis for Philipponnat. Charles told us that approximately 50% of the grapes in Aÿ were left on the ground during harvest. “Even some of the healthy looking grapes had rot inside the stem – you cannot see this at picking so some inevitably slipped through,” he said.

The final Pinot Noir we tasted was a blend of four plots from Clos des Goisses – the famous 5.5 hectare vineyard situated on an extremely steep 40° vertiginous slope adjacent to the house in Mareuil-sur-Aÿ. These four plots contain much older vines than the others in Clos des Goisses, noticeable in the rich, oaky character of the wine produced which, according to Charles, “comes from the grapes and not the barrels”. Wine from all four of these plots will be used in the Clos des Goisses 2017 blend. 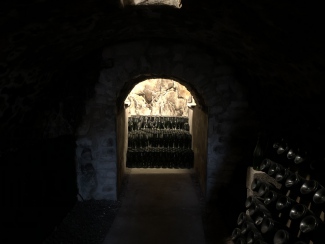 The cool and dark cellars in Mareuil-sur-Aÿ 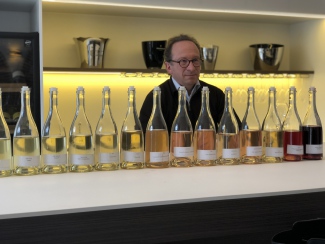 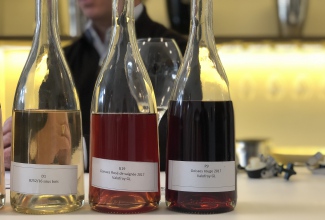 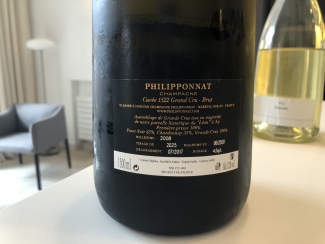 In the 1990s, Philipponnat pioneered putting disgorgement dates on the back labels of bottles 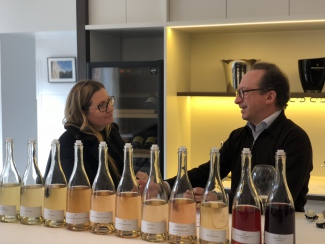 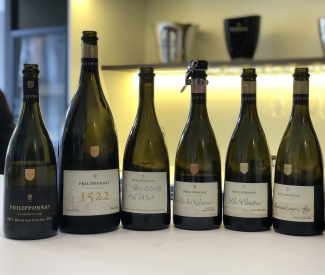 The stunning range of champagnes tasted 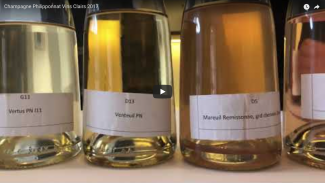 We finished our still wine tasting with a reserve wine, rosé and red wine. The reserve was last year’s Philipponnat Royale Réserve Brut NV blend – with 2016 as a base year. Once assemblage had been completed last year, the finished blend was put back into oak barrels for five months. “We like to put our reserves back into oak to keep them fresh,” Charles told us. “A touch of toast and minerality improves their ability to age.” All of this wine will eventually be used as reserve wine in the non-vintage; about 33% has gone into this year’s 2017 base year blend.

The rosé and red wine we sampled had been produced solely from grapes picked from loose bunches. “The loose bunches have longer stems, more air flow and therefore less botrytis,” Charles explained. This is apparently a result of planting a special selection of vines from Burgundy strains. “Everything we are planting recently is from Burgundy,” he added.

The rosé was produced using the saignée (bleeding) method. This involves allowing the grape must to remain in contain with the skins for a few hours, enriching the juice with colour and aromatic components, before ‘bleeding’ the juices off. Asked about the impressively deep colour of the red wine, Charles informed us that they concentrated the red by bleeding the must after 24-36 hours and then doing five days maceration before starting fermentation – allowing the intensity to come through in both the fruit and the colour. “The lees in the bottle will take out some of the harsher hints of pink, mellowing the tone,” he said.

Charles generously concluded our visit by sharing a selection of finished champagnes. Interestingly, after tasting the first champagne – Blanc de Noirs 2011 – immediately after the Pinot Noir vins clairs, Charles stated that “2017 may be better than 2011 after tasting the still wines”. We were then shown a trial disgorgment of the next prestige cuvée release: Clos des Goisses 2009. An already stunningly rich and creamy champagne, Charles compared 2009 to 1989 and believes they will age similarly. Although lacking the bright acidity of its predecessor, Clos des Goisses 2008, this new release has a huge, generous fruit-forward character. It will be available at the end of the year.

We also tasted a bottle of the extremely rare Clos des Goisses Justé Rosé 2007. Charles told us that the rosé is produced by blending the Clos des Goisses blanc with red wine from the same year. However, Philipponnat do not produce a rosé in every Clos des Goisses vintage and when they do, just 2-3,000 bottles are typically produced, compared to the 25,000 bottle production for the blancs.

Speaking of Les Cintres, Charles said: “I normally describe Clos des Goisses as athletic but this is more like a Turkish wrestler!” He is not wrong – they are both huge champagnes that take some time to open up. Although not as approachable as the 2006s, these are much more complex and interesting and will undoubtedly last for years. As one may well expect, these are extremely rare. Not wanting to take too much away from the vintage champagnes, especially Clos des Goisses, Charles produces just 2,000 bottles – and each one is individually numbered.