“In Victory I deserve it, In defeat I need it”

Pol Roger Sir Winston Churchill 2004, the 15th vintage of Pol Roger Sir Winston Churchill, is to be officially launched on Friday 4th September at George Hotel, Stamford, in line with Pol Roger’s new and exciting Champagne partnership with The Land Rover Burghley Horse Trials, taking place on the 3rd – 6th September 2015. Churchill’s relationship with Pol Roger dates back to 1945 and lasted until Sir Winston’s death in 1965. So close was his relationship with the Pol Roger family that, on the year of Churchill’s death, Pol Roger put black-bordered-labels on the bottles destined for the UK. Ten years later, Pol Roger named their prestige cuvÃ©e after him. 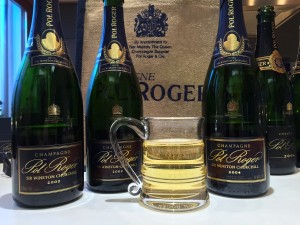 Following the phenomenal success of the superbly rich and mature Pol Roger Sir Winston Churchill 2002, the 2004 vintage has been a highly anticipated Champagne and we just couldn’t wait to get our hands on it, our noses in it and our lips around it! Fortunately we didn’t have to, as The Finest Bubble were lucky enough to be sent a bottle to taste prior to the official release (perks of the job!)

As the cork was popped and the Champagne poured, the initial impression on the nose was one of tropical grapefruit notes, which, once allowed time to warm and develop, transformed into delicious honeyed notes – a real characteristic of the 2004 vintage. A sensational palate of ripe peach, nectarines and citrus flavours combined with a refreshing acidity precede a succulently delicate finish and a fantasticallyÂ long aftertaste. 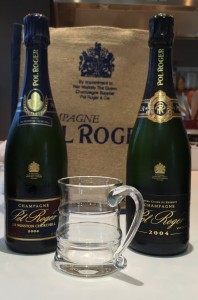 Constructed from theÂ best vines from the heart of the Grand Cru vineyards, this Pinot Noir dominant wine displays the classic powerful, rich structure and lasting finish that Sir Winston himself so adored. Alongside the Sir Winston Churchill 2004 we tasted the standardÂ Pol Roger 2004 vintage,Â and were treated to a real showcase of the greatness of 2004 – with both Champagnes displaying the typical honeyed notes and deliciously ripe fruitiness we’ve come to expect from this great vintage.

As should be common practice with every new release, we triedÂ the new Sir Winston Churchill 2004 alongside the previous vintage, 2002. Whilst the 2002 speaks for itself – an extremely youthful, yet powerfully rich and mature Champagne from perhaps the best Champagne vintage of the last 20 years – we were pleased to find the 2004 vintage did not hide in its shadow. Sir Winston Churchill 2002 displayed slightly more fruit intensity, but the 2004 stood up reassuringly well to such an excellent predecessor; very forward fruit, incredible length and refreshing acidity, this was a superb showing from an excellent vintage – the new 2004 is pleasant to drink now even while it is this young.

Fittingly, we tasted Sir Winston Churchill 2004 in true ChurchillÂ style: out of a tankard. The man who changed the word famously drank his vintage Pol Roger from a tankard and as such, these new limited edition Pol Roger tankardsÂ have been released on the 50th anniversary of his death in memory of the great gentleman who inspired not just a generation, but also an astonishing prestige cuvÃ©e Champagne. Look out for the tankards on The Finest Bubble website soon. 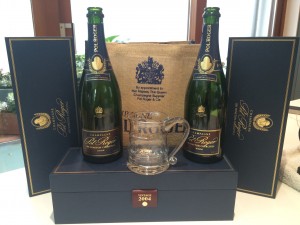