English sparkling wine producer Nyetimber made history with the launch of the first English prestige cuvÃ©es last month.Â We were so impressed with the first two vintages,Â Nyetimber 1086 2009Â andÂ Nyetimber 1086 RosÃ© 2010, that we decided to test them against champagnes of a similar price tag.

The experience was an educational one that ultimately provedÂ how well-suited the triumvirate of Chardonnay, Pinot Noir and Pinot Meunier grapes are to the climate of southern England. 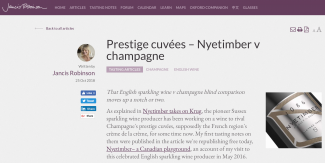 The full write-up from Jancis Robinson can be found here