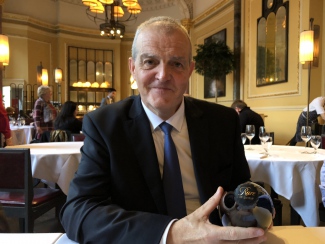 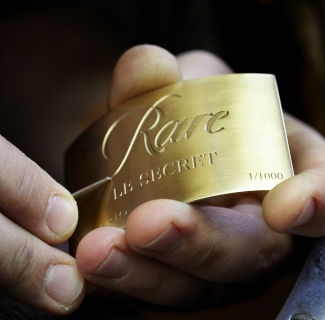 There are just 1,000 magnums of Rare Le Secret Goldsmith in existence

Rare Champagne last month announced the release of two ultra-prestige champagnes: Rare Le Secret High Jewellery and Rare Le Secret Goldsmith. In 1997,Â Rare Champagne Cellar Master, RÃ©gis Camus, decided not to declare a vintage and instead blended a small quantity of Rare 1997 champagne in magnums only, and aged them secretly in his private cellar.

Last week, we had lunch with RÃ©gis Camus and Diane-Sophie Lanselle, Communications Director at Mellerio, to discuss the now unclassified secret project and find out what inspired this great partnership.

TFB: Why 1997? What was it about that vintage that made you think, ‘this is special’?

RC: “I made 1997 because it was a challenging year. There were many things that were not extraordinary – very few houses released vintage champagnes in 1997. It wasn’t until well after harvest, once fermentation was complete and we tasted the vins clairs in spring, that I realised the wines were very special.”

TFB: Why did youÂ decide to bottle theÂ champagne in magnums only?

RC: “We had received some empty magnums in 1996 for the next vintage of Rare. I decided to take 1,000 of the magnums and age 1997 as a secret project in my private cellar.”

TFB: What can you tell us about the blend and which villages contributed grapes?

RC: “As always with the blanc vintage of Rare Champagne, the blend is 70% Chardonnay and 30% Pinot Noir. The champagne is produced from 100% Grand and Premier Cru rated villages – in 1997, Chouilly and Vertus produced some stunning wines. The villages from the Montage de Reims, such as TrÃ©pail and Villers-Marmery also some produced some impressive Chardonnay grapes that year, which is rare for the region.”

TFB: Why did you wait so long to release the champagne?

RC: “When we decided to produce Rare 1998 in magnums, I focused on the 1998 and almost forgot about the 1997 – it really was myÂ secret! In 2016, I explained the story to BenoÃ®t [Collard, Global Executive Director of Piper-Heidsieck since 2015] and he was quite surprised! Because we didn’t declare the vintage at the time, we couldn’t release it as ‘Rare 1997’ [hence why the vintage isn’t on Rare Le Secret bottles].

RC: “BenoÃ®t had recently watched a documentary about French treasures and learned that Mellerio had supplied Marie Antoinette around the same time as Piper-Heidsieck, in the 1780s. He decided to approach Mellerio to see if they were interested in combining the two French legacies and the idea was born.”

TFB:Â CanÂ you tell us about the decision to keep it a zero dosage champagne [a first for Rare Champagne]?

RC: “I always answer dosage questions with a question! ‘What is the right dosage’? Some people say 9 g/l is perfect. I cannot choose 5 or 6 g/l because it is trendy, I must choose what is right for each champagne. We had really soft acidity in 1997, so I decided quite quickly that it didn’t need a dosage.”

TFB:Â To finish, what are your thoughts on the 2018 vintage? Is it the vintage of the century?

RC: “This is the year we do not need a Chef de Cave… it is an easy job! We need to pay homage to the chalk… it rained so much in the winter and spring, the chalk was like a sponge. When summer came, the roots didn’t dry out because of the water underground. We had no disease and good maturation of the grapes. Unlike 1997, where we had some terrible areas and only a few great ones, in 2018 the whole territory is perfect. This is the first time we have had both this quality and quantity.”