Following the recent release of Rare Le Secret, the 20-year clandestine project of Rare Champagne Chef de Cave Régis Camus, we were invited to a vertical tasting of past Rare Champagne vintages – dating all the way back to 1979 – with the secretive cellar master himself.

Taming the natural forces was no easy task and when assemblage was complete and the final blend bottled, the team were so proud of the final product, they called it Rare. A testament to exceptional vintages where nature unleashes its unstoppable forces, Rare cuvées are only produced in supernatural years, hence the scarcity of vintages.

All blanc vintages of Rare are a blend of 70% Chardonnay and 30% Pinot Noir, with the Crus that contribute grapes changing year-on-year to reflect the strengths of each particular vintage. Rare vintages typically have lots of tropical fruit, like mango, kiwi and pineapple.

Asked to pick a favourite, Camus commented: “The 2002 is the definition of what I am looking for. This means maturity… but also youthfulness with precision, complexity and delicacy. Rare 2002 has the minerality and freshness which should be the house style.” Although the dosage for the original disgorgement of Rare 2002 was 9.5 g/l, Camus made the decision to reduce the dosage for the latest disgorgement to 9 g/l. “I tend to add one extra gram to my personal taste… for 2002 it was 11 g/l on first bottling, now it’s 9 g/l,” he explained.

For Rare Le Secret, Camus made the decision to not add any dosage – the first time in the history of Rare Champagne. “The wine didn’t need any dosage,” was the simple justification. Of the year, Camus noted that “1997 wasn’t considered the best vintage”, however they “had some great Chardonnay and Pinot Noir”, hence he decided to experiment with these secret magnums. “This fits the philosophy of Rare… it isn’t always produced in the great years… in the harder years, you get some small parcels of great grapes.”

The oldest two vintages were both late harvests (1988 in late-September and 1979 in October!). Camus shared his tasting experience with these champagne; which involves an old library in Ireland, a burnt-out fire, cigars and cognac. Indeed, the colour suggests the champagnes are more like still wines, yet both seem incredibly racy and youthful. Plenty of life left in both.

Finishing with the only rosé in the Rare Champagne portfolio, Rare Rosé 2007, Camus spoke of the importance of the red wine. “In 2007, the cellars were full after the lovely run of 2002, 2004 and 2006, yet despite the difficulties in 2007, there were some good Chardonnay and Pinot Noir grapes. Most important is the colour, which comes from the red wine – and the Pinot Noir from Les Riceys was great in 2007.”

With 10% Pinot Noir still wine added to the blend, the colour is a seductive coppery-gold. “We look for purple and blue notes in the copper colour after 10 years,” Camus added. Producing a rosé champagne with such a high percentage of Chardonnay (56% Chardonnay, 44% Pinot Noir), is a daring move that really works; the aromatics have just started to lift off and this is perfect for drinking now.

We also recently tasted the Rare Champagne range with Jancis Robinson MW. To set the scene, we blind tasted the most recent Rare release, Piper-Heidsieck Rare 2002, alongside other prestige cuvées from the same vintage – notes from which can be found below. Although Dom Pérignon 2002 came out on top, the difference was marginal, with all four champagnes spread between 18/20 and 18.5+/20 – a testament to the enduring quality of the vintage. 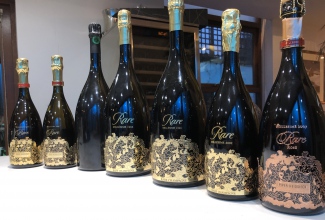 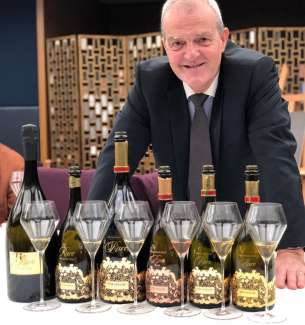 Régis “The Man With All The Secrets” Camus 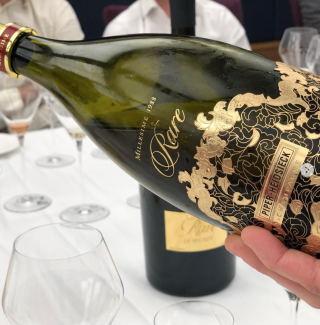 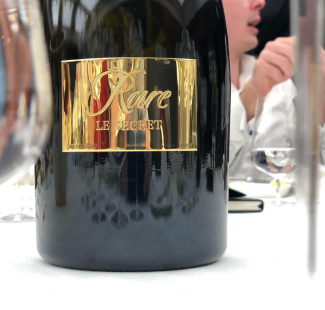 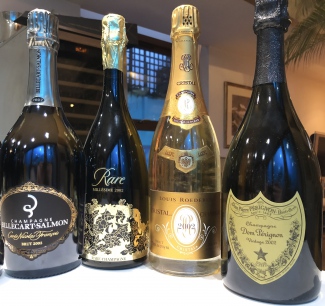