It is not universally known that the champagne houses of Salon and Delamotte are conjoined. Affectionately termed ‘sister houses’, they are produced and managed by the same team, sharing grapes, offices and winemakers alike. Moreover, it is even less widely understood that both houses belong to the burgeoning portfolio of the Laurent-Perrier group, the same family company that runs the (contrastingly,Â very well known) eponymous champagne business based in Tours-sur-Marne.

Located on the other side of the Marne River, home for Salon and Delamotte is the grand cru commune Le Mesnil-sur-Oger. Situated at the very heart of the Chardonnay-rich CÃ´te des Blancs, next-door neighbours Salon and Delamotte were bought by the Laurent-Perrier Group in 1986, then under the leadership of champagne legendÂ Bernard de Nonancourt. Although founded more than 200 years apart (Delamotte opened its doors in 1760, Salon not until 1911), the houses supposedly always had close familial relations. Given also their common love affair with Blanc de Blancs, the decision to coalesce the companies in 1988 seemed only natural.

Both houses have a very narrow focus: quality, rather than quantity, is the philosophy here. Delamotte produce around 800,000 bottles annually, spread across just four cuvÃ©es: a Brut NV,Â a RosÃ© NV, and a Blanc de Blancs NV and Vintage. Salon, on the other hand, famously produce just one cuvÃ©e: the ultra-prestige Le Mesnil Blanc de Blancs. Production at Salon is just 60,000 bottles in a high-volume year (it is often much, much less) and just 41 vintages have been released in its 100-year history.

A unique story of the singular (one house, one village, one vintage, one grape variety, one cuvÃ©e), Salon has always been somewhat of a cult champagne.Â With so few available, each new release is swept up by thirsty investors and the price consequently increases year upon year. Nowadays, a sybaritic lifestyle and Salon go hand in hand. We were even told the story of a recently married Japanese couple, who, so utterly obsessed with Salon, travel the world with the aim of drinking it everywhere they go. (Incidentally,Â 30â€“35% of Salon and Delamotteâ€™s exports go to Japan).

Though Salon is incontestably the star, Delamotte does not need the reputation of its celebrity sibling to attest to the quality of its champagnes. The fact is, they are intertwined. In the years that Salon does not declare a vintage, the high quality grapes go towards producing Delamotte. As much a Blanc de Blancs specialist as Salon, Delamotte and its range offers consumers the chance to mingle with Salon’s outstanding style at a mere fraction of the price.

Indeed, when we met with president Didier Depond (who has managed both companies since 1997) at the administrative premises in Le Mesnil this summer, a range of quite spectacular Delamotte Blanc de Blancs were appropriately presented as a warm-up act for our scheduled Salon tasting.

We sampled the new vintage release, Blanc de Blancs 2012, to which two new crus, Chouilly and Oiry, were added to the traditional blend of Le Mesnil, Oger, Avize and Cramant. Depond described it as a “super-difficult vintage” and the small 80,000 bottle production was apparently only possible with a very careful selection of grapes. “The Pinot Noir was especially difficult in 2012.”

Depond also shared two vintages of the Delamotte Blanc de Blancs Collection, a ‘late-disgorge’ concept initiated five years ago whereby select vintages are kept on the lees for a minimum of 15 years before release. Depond said he loves the “freshness and richness” after this time, adding, “the balance is quite perfect.”

Although today Salon is one of the most expensive and widely sought after commercially produced champagnes, it was not originally made with sales figures in mind. WhenÂ EugÃ¨ne-AimÃ© Salon, a Champagne connoisseur enchanted and seduced by the terroir of Le Mesnil, decided to produce the original Blanc de Blancs champagne, he intended to drink it himself. And that he did. With the help of a few fortunate guests of the Maison, EugÃ¨ne-AimÃ© enjoyed the first four vintages of Salon, produced between 1905 (the first known vintage) and 1921 (the first commercial vintage), alone.

With the tragedy of the war over,Â EugÃ¨ne-AimÃ© was encouraged by his satiated friends to profit more fully from his wine and thus Champagne Salon was officially born. Since then, it has always been made the same way, from the same 20 parcels of Chardonnay in Le Mesnil. The grapes come from the beautiful 1 hectare ‘Jardin de Salon’ at the rear of the house and from a further 5 hectares purchased from 15 growers with whom they have been doing business “for over a century.”Â Of course, the vines have since been replanted (the average vine age today is 35 years) andÂ the plots are all roughly on the same latitude in the middle of the village.

Interestingly, the grapes from half of the equally famous Clos du Mesnil vineyard used to go into the Salon blends until 1977, when the owner died and Krug eventually took over. Depond spoke of the importance of maintaining well-established relationships with growers – especially in grand cru Le Mesnil, where a 1 hectare vineyard will fetch anywhere between â‚¬3-4 million, according to his best estimate.

We began our tasting with perhaps the most keenly anticipated vintage in Salon’s history. A year that needs no introduction, 2008 would likely have been zealously coveted by Salon fans based on vintage reputation alone. However, Depond fuelled the fire in 2014, declaring Salon 2008 the “best ever” and revealing that it was produced only in magnums. Since then, it seems some admirers have been quite literally counting down the days to its release. Our tasting with Jancis Robinson MW was a world first.

“It was not an easy harvest,” Depond told us, “the quality was good only after a super, super deep selection [of grapes].” Apparently, following the first vins clairs tasting Depond phoned chef de cave Michel Fauconnet (who also oversees winemaking at Laurent-Perrier and Delamotte) and they both had the same idea. “Because the quality was so good but the quantity was so much smaller, we both agreed to produce only magnums.” Although magnums aren’t quite the rarity at Salon that they are at other houses (magnums represent 12-15% of their production, compared with 2-3% elsewhere), their decision was still unexpected.

Already quite accessible for a magnum, Salon Le Mesnil Blanc de Blancs 2008 is intense, complex and persistent – Depond likened it to Salon 1982. There is no doubting the hysteria it will cause among investors upon release.Â There is a twist, however. Salon 2008 will be sold exclusively in a specially designed wooden case that will include two bottles each of Salon 2007, 2006 and 2004. No individual magnums will be sold.

Further, the six bottles of 2007, 2006 and 2004 are all ‘Edition 2019’, having been late-disgorged in January 2019 (along with Salon 2008). They have also all been jetted (squirted with a micro-spray of water immediately after disgorgement to prevent oxygen ingress), a practice Salon have been carrying out fastidiously for the last 10 years. All the champagnesÂ we tasted had been opened three hours prior to our appointment and then re-stoppered.

Depond called 2008 “the dream vintage” but was quick to highlight just how much better it will get. They are famous for producing wines with almost endless ageing potential, and, according to Depond, “it is best to drink Salon after 15 years … before this it is a teenager.” Many may find it difficult to wait quite so long however, as Salon 2008 will be the last release for some time. “Since 2008,Â there has been no genuinely great vintage in Champagne,” said Depond (including the widely heralded 2012, which Salon did not produce). The next release will be Salon Le Mesnil Blanc de Blancs 2014. 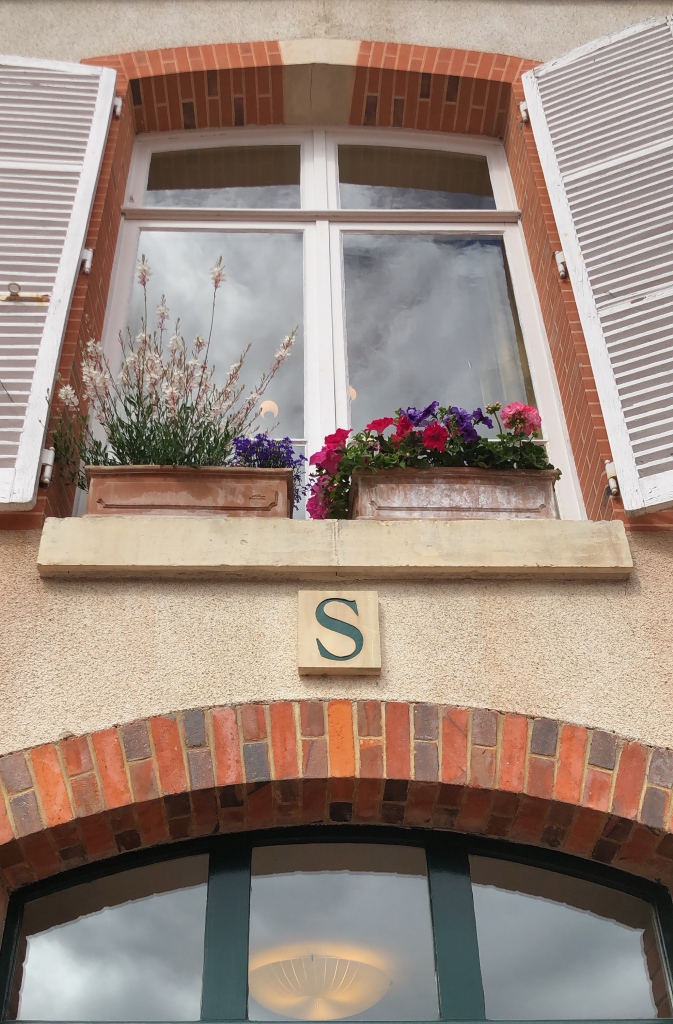 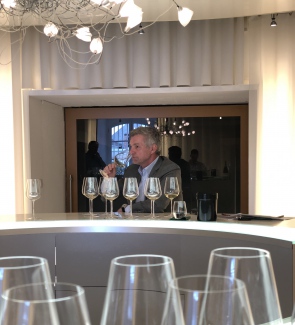 Didier Depond has been president of Salon and Delamotte since 1997 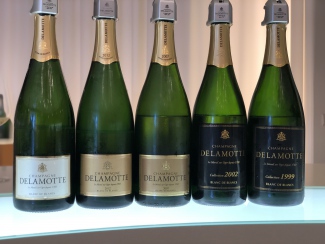 Blanc de Blancs are the focus at Champagne Delamotte 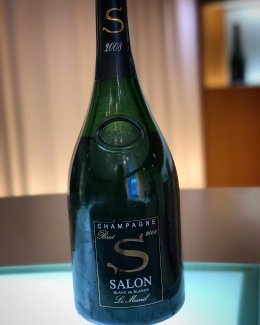 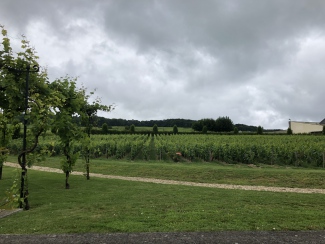 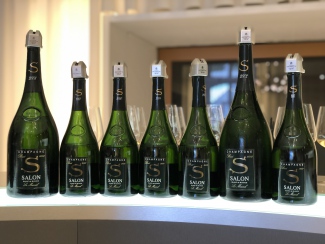 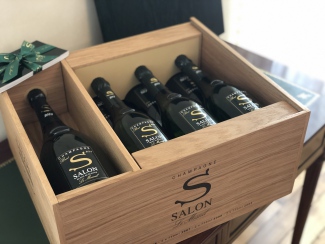