Every year, some 120,000 pickers descend on the Champagne region in early September for the annual harvest, and have roughly a three-week window to complete the entirely manual picking – beyond which point the grapes are past their best and the harvest is declared finished.

However,Â pickers may be allowed some respite this year, as the ComitÃ© Champagne, who set the harvest parameters for the region, announced in July that maximum allowable yields this year will be the lowest they’ve been for a decade. Growers are limited to 10,000 kilograms per hectare, with a further 500kg per hectare allowed to be released from the RÃ©serve Individuelle (RI) – still wine that hasn’t been through secondary fermentation – in February, taking the total allowable yield for 2015 to 10,500kg per hectare, or about 307 million bottles. 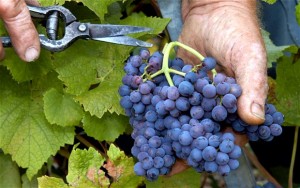 Yields are capped due to the high-density planting system in Champagne, with vines planted very close together (8,000 per hectare) to improve ripening and therefore quality. The reason for the yield being set so low in 2015, despite Champagne sales recovering last year, however, relates to the amount of stock currently being held in the region. In good years, every producer is required to set aside a percentage of their wines as a precaution against disappointing future crops or to meet exceptional demand. Stored in temperature-controlled tanks, these form a reserve stock, managed by the ComitÃ© Champagne. With the most recent harvest’s

proving prolific, bottle stocks on hand amount to 3.5 times the current sales figures. As appellation limits are traditionally set in accordance with future sales and stock predictions, this year’s yield has been deliberately set low, with the confidence that there are enough bottles in stock to prepare for any sudden spike in sales.

So the 2015 harvest may well involve less picking than the pickers are used to. But when will the picking start? Well, much like everything else in Champagne production, the harvest start date is scientifically determined – using the RÃ©seau Matu system.

Started in 1950, but only widely accepted in 1987, this system involves a network of small teams of vignerons (winemakers) in selected villages sampling the grapes in the run-up to the harvest and relaying the information back to the ComitÃ© Champagne. Just as the grapes start to change colour (vÃ©raison), samples are taken twice a week by 500 vignerons in some 450 controlled plots across the length and breadth of Champagne. The selected clusters are checked for rate of colour change; average weight; estimated sugar and total acidity content and the results are transmitted same day allowing the ComitÃ© Champagne to establish reference values for each parcel of vines, together with mean average values (potential alcohol levels, natural acidity etc.) for each department and grape variety.

A data summary is then notified to the technical officers concerned, enabling the regional heads to attend the pre-harvest meeting with a clear idea of when picking should start in their respective communes. Normally the vignerons will be looking for at least 10 degrees potential alcohol before they start picking. Once a date has been decided, some 120,000 pickers work in teams (or ‘hordons’ if you prefer French) of four per hectare picking grapes manually. The requirement for whole, undamaged grapes is the same today as it was in the 18th century and with the grape varieties in Champagne all reaching their peak of ripeness at about the same time,Â the ‘hordons’ work around the clock, with only a three-week window in which to work.

The manually picked, whole and undamaged clusters remain that way right up until the point of pressing itself. The clusters are transported to the press house in purpose-built bins with drainage holes that allow liquid to escape, preventing the berries from macerating in their own juice. Once there, pulp extraction takes place and the whole Champagne production process commences.

So…we know the harvest will have the lowest volume of the last 10 years, we know why it will take place when it takes place, but the most important question is…how will the 2015 vintage taste in 8-9 years?

Well, with its early, hot summer, 2015 should be a good vintage for France as a whole. In Champagne specifically, the crucial period of vÃ©raison began early in mid-July, thank to the heatwave. In late spring many vineyards were attacked by black rot, downy mildew and powdery mildew – however the heatwave limited their effects in most regions. Pascal FÃ©rat, co-president of theÂ ComitÃ© Champagne commented in late July:Â “The hot weather in July has provided ideal ripening conditions, and if the weather holds out the quality of the grapes at harvest should be excellent.” Since then, steady rain through mid-August has cooled things down considerably to a regular summer temperature – all good news for the vineyards.

So, if you’re looking for some late-summer employment, you may want to register your interest early – demand may be lower than usual and although a tentative harvest start date of September 10th has been set – this date could be brought forward if the weather holds up. Happy Picking!