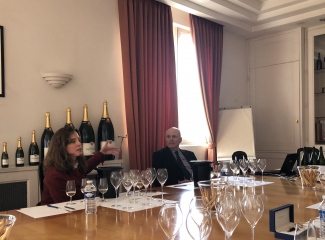 “Not a great year for Pinot Noir and Pinot Meunier, but a good year for Chardonnay”, Chef de Cave LoÃ¯c Dupont began, echoing the general consensus of 2017 that we’d heard at other houses. Given that the vintage was kinder to the white grape variety, one might expect a Chardonnay dominant house to have had a more favourable experience with this difficult harvest. We met with Dupont and Marketing Director Vitalie Taittinger to find out.

“The difficulty for Chardonnay was harvest timing,” Dupont told us. Despite having reached the right acidity by the start of the harvest, the grapes weren’t yet ripe enough, so Dupont made the decision to delay picking. “Fortunately, they jumped very fast… reaching maturity in 2-3 days,” he said.

The first two Chardonnays we tasted were from Avize and Le Mesnil-sur-Oger, two consistently high-quality Grand Crus in the CÃ´te des Blancs. Both were promising – Avize for its remarkable aromatic potential and Le Mesnil for its richness and structure.Â Indeed, Essi Avellan was most impressed with Le Mesnil, commenting: “This is the first [base wine] that shows real potential for me.” Together, these two still wines will constitute 60% of the Comtes de Champagne 2017 blend.

Interestingly, 6% of the Comtes blend comes from wine partly produced in oak barrels. For these wines, first fermentation takes place in stainless steel vats, after which (around November) they are put into oak barrels, where they rest for around six months before being transferred back to stainless steel vats for malolactic fermentation. “We must experiment with barrels,” Vitalie said, adding that they give a vanilla toastiness to the wine.

Typically, wine from Chouilly is produced this way. We tasted two samples: Chouilly matured in brand new oak barrels and Chouilly matured in three-year old oak barrels. Dupont believes the small 6% addition (1-2% of which is from new barrels, the rest from older barrels) helps the ageing capacity of Comtes: “Micro oxidation in barrels helps protect it from future oxidation.”

Next, we tasted a selection of Pinot Noirs from Grand Cru villages in the Montagne de Reims. Both Amobonnay and Mailly had impressive fresh and forward fruit characteristics, which Dupont believes will lend the 2017 Brut RÃ©serve NV blend a fruit-flavour dominance. Unfortunately, the Verzenay grapes succumbed to adverse weather and complications during picking. “Things evolved quite quickly in Verzenay; the best results were from those picked earlier”, Dupont said. For our educational benefit, he shared an example of a poor quality Verzenay base wine, which was full of those earthy aromas of mushroom found in undesirable Pinots and subsequently won’t be used in the blending. 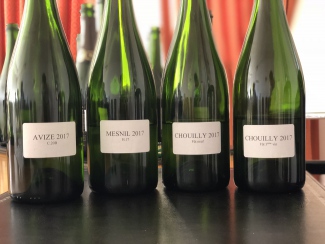 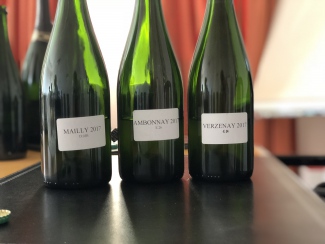 Not enough power in the Pinots for a Vintage 2017

Overall, the prevalence of Chardonnay in the Taittinger range means they will perhaps be less negatively affected by this difficult growing season than others. Asked for the nearest vintage comparison, Dupont likened 2017 to 2011 – a similarly troublesome year that favoured Chardonnay over Pinot. Although lacking the power of Pinot to be a classic Brut MillÃ©sime year, Dupont will make a small amount of Comtes de Champagne 2017, “to showcase the characteristics of the vintage”.

Dupont informed us that Taittinger have experimented with jetting on half-bottles, which is arguably more important on bottles of that size due to their faster oxidation risk. They are currently waiting for the longer-term results, after which they plan on experimenting with jetting on standard bottle sizes. Taittinger have also conducted trials withÂ Diam Mytik technological corks, but seem more hesitant on this front. Dupont did however raise a valid point – with the rise in popularity of technological corks, manufacturers of natural cork have been forced to improve their product. For now, Taittinger remain happy with the quality level of their natural corks. 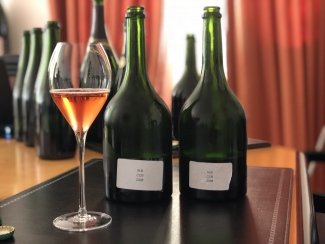 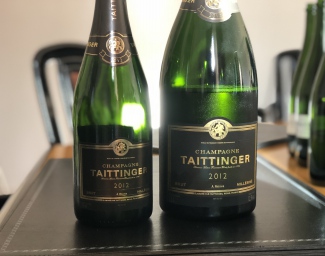 Bottle vs Magnum: our favourite comparison