Appointments at Taittinger always feel very much like family affairs. Nowadays, there are few large champagne houses that are still independently owned and managed by the founding family and, perhaps somewhat due to Taittinger’s turbulent start to the century (the business was sold and then bought back in the 2000s), they seem quite eager to remind visitors that they are now, more than ever, in it together.

The family ambience chez Taittinger is no doubt enhanced by the youngest generation being so directly involved in proceedings. Third generation Pierre-Emmanuel Taittinger (who almost launched a French presidency bid in 2017) appeared at the end of our meeting for a hasty farewell, however his children Clovis and Vitalie have more hands-on participation. Though in his role as export director Clovis is rarely found at the Maison, daughter and marketing director Vitalie has kindly hosted us on each and every of our many visits in recent years.

Also present during our meeting in June were new chef de cave Alexandre Ponnavoy, managing director Damien Le Sueur, andÂ brand ambassador Jean-Pierre Redont. Unusually, there doesn’t appear to be an obvious line of hierarchy within the core leadership, which, although can result in slightly erratic conversation at times, certainly amplifies the feeling of family/team spirit.Â Discussion centred around the newly released vintages and the future for Comtes – notably, the latter’s ultra-scarce larger formats.

We began with PrÃ©lude Grand Crus NV, a lesser known champagne in the Taittinger range. As the name suggests, the wines that make up the blend originate solely from Grand Cru rated villages – the Chardonnay primarily from the CÃ´te des Blancs (Avize and Le Mesnil) and Mailly; the Pinot Noir from Ambonnay and Verzenay. Although not labelled a vintage, it is made exclusively from wine of a single harvest. We tasted a magnum – the larger formats are due to be launched later this year – from 2014.

Also coming later this year is the transition to vintage 2013. Although Brut Vintage 2013Â has the same 50:50 Pinot Noir:Chardonnay split as PrÃ©lude, the grape origin is 70% Grand Cru and 30% Premier Cru. The Chardonnay sources are much the same but the Pinot Noirs come from a wider range of villages, specifically those in cooler regions of the Montagne de Reims.

The 2013 harvest began late – on the 24th and 25th September – and was the most recent harvest to finish in October. The team stressed that above all they are “looking for freshness” with the vintage champagne. We were fortunate to taste both bottle and magnum and can say with confidence that, despite the vintage being significantly overshadowed by its predecessor, it is a worthy follow-up to Brut Vintage 2012.

We were then treated to a real feast of Comtes: past, present and future. The current release, Comtes de Champagne 2007, was launched last summer and is a favourite of the Taittinger family’s. The 2007 harvest began in August following an exceptionally warm growing season and as champagnes hit the market the vintage generally came to be regarded as good, but not outstanding.

Our hosts, however, were pleased to discover that Comtes 2007 turned out much, much better than expected – “a real archetype of Comtes”. We were told the story of Comtes 1997, whereby Claude Taittinger, concerned about the poor reputation of the vintage, sold it at a low price with minimal marketing. When the family bought the house back from US investment firm Starwood Capital GroupÂ in 2006, they were surprised to find magnums of Comtes 1997 (kept in the cellar “almost by mistake”) and were blown away by how they tasted – superb, apparently.

Taking confidence from this discovery, they produced a very small number of Comtes 2007 magnums (so few in fact, that our visit was supposedly the first time the team had tasted one). Whereas second fermentation in bottle takes place under the standard crown cap closure, the magnums are aged under cork. The larger formats really are something to behold, more aromatic and developed than the bottles and bursting with energy and complexity.

Whilst on a magnum roll, we were extremely fortunate to taste a larger format Comtes 1998. We must confess this had actually been requested, as we planned to showcase one at our autumn champagne masterclass hosted by Jancis Robinson MW. Had we known however, that there are just nine left in the cellars in Reims, we might not have been so bold – though spoilt we were, indeed. Fortunately, the magnum was in impeccable condition and Vitalie generously agreed to sell us a few for our tasting this October, an event certainly not to be missed.

Although Comtes RosÃ© is produced in less than 10% of the quantity of its blanc sibling, it’s an important piece of the Taittinger portfolio and a champagne whose vinification process has been renovated recently. Historically, Comtes RosÃ© had a higher Pinot Noir content than today (around 70% vs 65%). When the new team took over in 2006, they tasted several old vintages and realised they were fresher and richer than the current style. Comtes RosÃ© has therefore been reverted back to a higher percentage of Pinot Noir – primarily from Bouzy, “the perfect area” – in recent years.

Taittinger also learned that Comtes RosÃ© needs “five more years in the cellars to get the necessary depth in the wine”, so will be released later than Comtes blanc in the future, a trend which has begun with vintage 2007. We were also pleased to hear that further developments include an increased production of larger formats (hooray!), and Jeroboams and Methuselahs will, from 2012, be produced in their bottles, rather than being made in 75cl bottles and transferred, as is – disappointingly – popular in Champagne. 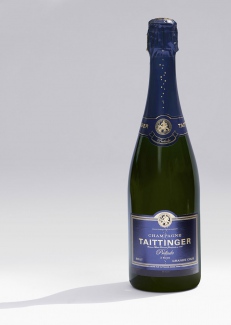 Though not labelled a vintage, PrÃ©lude is produced exclusively from Grand Cru wine of a single harvest 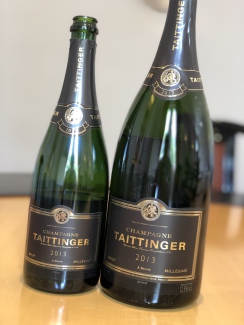 Vintage 2013 was the most recent October harvest 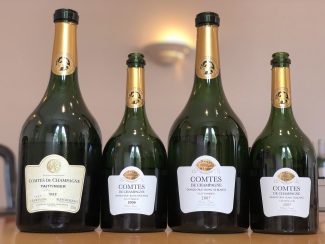 The notoriously rare Comtes magnums… you wait for one and then two come along at once! 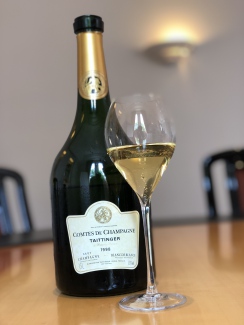 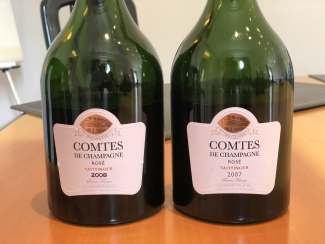