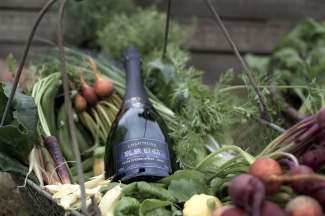 Last week, we were invited to the LVMH offices for an exclusive tasting of Krug’s latest release of their rarest and most prestige Champagne: Clos d’Ambonnay. Steeped in history and grandeur, the story of Clos d’Ambonnay’s discovery is so mystical and prodigious, it’s worth telling again…

In 1991, just two years after Olivier Krug joined the house, a Clos surrounded by a protective wall since 1766 was found in Ambonnay, Krug’s favourite village and largest source of Pinot Noir. The tiny site of 0.68 hectares was purchased in 1994, and the first vintage was produced in 1995. Kept an absolute secret until its release in 2007, Olivier teasingly revealed, “We even kept it a secret from Moët for some years!”

President and CEO of Krug Champagne, Margareth Henriquez was there to greet us at LVMH and she led the presentation and tasting of Krug Clos d’Ambonnay 2000, as well as Krug Vintage 2000 and a very special blend of Krug Grande Cuvée.

The 2000 vintage was very unpredictable, good on the whole, but hail and storms that swept across the region in July prevented it from being exceptional. However, any vineyard that was lucky enough to avoid this inclement weather was certain to produce grapes of an outstanding quality. Fortunately, Clos d’Ambonnay was one of those vineyards. Additionally, the harvest was a late one, allowing exceptional richness in the Pinot Noir grapes – all of which were picked on September 29th – and just 5,158 bottles have been produced of Krug Clos d’Ambonnay 2000, each individually numbered.

Olivier Krug described the Champagne as: “Precise and balanced… I believe we have succeeded in expressing the full potential of this walled plot with true expression and poise. Over the 15 years that Clos d’Ambonnay 2000 has rested in our cellars it has developed astonishing grace and finesse.”

Now there’s no denying this is a luxury Champagne and what struck us immediately were the rich aromatics. A complex kaleidoscope of aroma, hints of turkish delight, honey, lavender and creme brûlée combine to produce a quite unprecedented nose. On first taste in the mouth, there is a notably powerful dryness, but on revisiting, the red berry flavours really shine through. This is floral and light and although in need of a few years’ development to show its full potential, really quite delicious now – but as with any other Clos d’Ambonnay vintage, it all comes back to the price tag. In classic Olivier Krug style, he maintains that Krug Clos d’Ambonnay is “still an experiment.” Albeit an expensive one for the consumer…

After a sampling of Krug Vintage 2000, a Champagne with which we are very familiar, and one that showcases the loud and powerfully dominant Krug style perhaps like no other, the £1,600 question is hard to ignore. Whilst Clos d’Ambonnay is undoubtedly a superior expression of the 2000 vintage, does its superiority warrant its tenfold price tag? Well, if Champagne appreciation was solely an art of number crunching and score comparison, then the answer is quite clearly: no. However, as with any art, the admiration of fine wine surpasses a point of numerical contrast and if we were talking Renaissance paintings, then Clos d’Ambonnay is the Mona Lisa. The economist in me says 10 bottles of Krug Vintage 2000 is the obvious choice, but the wine lover in me now knows that to drink just one glass of Krug Clos d’Ambonnay is to tantalise the senses – a delicately intense and joyful experience of awe and wonder – this is the height of the art and industry we love. Can you really put a price on that? 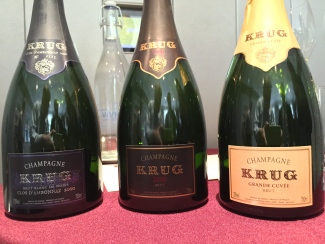 “I must admit, Krug’s 2000 Clos d’Ambonnay remains a mystery. The first bottle I tasted, in March, at Krug, was utterly spectacular. Rich, creamy and ample on the palate, the 2000 was captivating from start to finish. Two thousand is the first vintage made entirely by current Chef de Caves Eric Lebel. My impression at the time was that Lebel had given his Ambonnay softer, gentler contours than the 1995, 1996 and 1998, all which were much more austere when first released. But then I tasted the 2000 several times in the US, where it has so far been less impressive. I am hoping issues with shipping for a handful of samples will turn out to be the root cause, and that the ‘real’ Ambonnay will be closer to what I tasted at Krug in March. If that turns out to be the case the 2000 will be due for a major upgrade.” – 92+?/100, Antonio Galloni, July 2015

“Gorgeous fresh colour with hints of emerald and buttercup yellow, and minuscule bubbles across the glass. Hazelnut and some bruised apple, a sense of wet river stone minerality, cream and a touch of something intriguingly herbal in the background. The palate has some serious luxury with the mousse creamy across the tongue, but there is cocoa and buttery Brazil nut flesh, the weight filling the mid-palate before a precision to the acidity that scythes through something like the 1996, the little toast notes filling underneath. A baby, but the components need some time to knit together.” – 96-98/100, Tom Cannavan, August 2015

Krug Clos d’Ambonnay 2000 will be available to purchase on The Finest Bubble website in the next month. 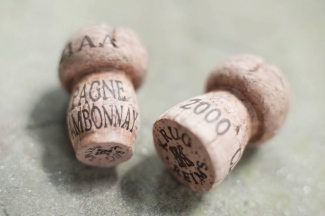