There is a quiet revolution going on with corks: the technology now exists to eradicate taint. In the late-1600s, when it became possible to create glass wine bottles with an identical shape and design, corks started to become the sealing material of choice. Soon after, it was discovered that not only did corks seal the bottle, but only allowed a tiny amount of oxygen into the wine. This was important as it slowed down the oxidation process, letting the wine age naturally and evolve slowly over time.

Now, over three centuries later, it is the corks themselves that are evolving. Traditionally, corks are made from cork oak trees, grown in forests in Portugal and Spain and a percentage, often thought to be around 10% are infected with Trichloroanisole or TCA, a natural compound that at higher levels can impart musty flavours and aromas to wines. Wines that contain TCA at a detectableÂ level are described as either being corked or having corkiness. 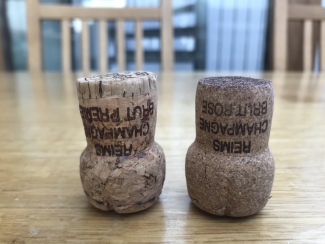 An alternative to natural corks that quickly became popular are agglomerated corks since they are much cheaper to produce. Commonly referred to as ‘agglo’ corks, these are made up ofÂ small pieces of granulated cork fused together – which means that more of the bark is suitable for producing a wine bottle closure, but TCA occurrence in these is often higher than regular corks. Technical corks began to emerge on the market in the 1980’s and consist of a dense agglomerated cork body, with natural cork ‘discs’ glued on one or both ends, providing a closure that is chemically stable and mechanically strong.

The picture on the right shows Louis Roederer’s technical corks on the left and the Diam cork on the right. On the technical cork (on the left), you can clearly see the ‘discs’ of natural cork glued onto the top and bottom of the agglomerated middle.

One company has taken the technology to a whole new level. Diam launched what they call a ‘technological cork’ in 2005, which is made of 95% processed cork (the rest is acrylate and polyurethane). Diam technological corks do not have discs of natural cork glued to the top and bottom like technical corks – they instead look more like an agglomerated cork. The real genius lies in their revolutionary production method. Diam treat their corks to the same supercritical carbon dioxide extraction process used in producing decaffeinated coffee. This process, called DIAMANTÂ® technology, extracts the volatile compounds of cork that can harm sparkling wine. Essentially, very hot and intensely pressurised carbon dioxide washes out all of the chemical impurities, including (critically) TCA.Â The cleaned cork is then mixed with microparticles that plug the minute air spaces between the fragments of cork and a binder to hold the cork together. 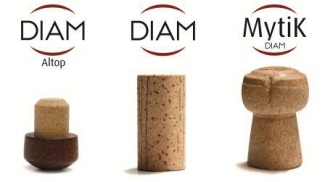 Diam have corks for still wine, sparkling and spirits

There are other products that guarantee elimination of up to 80% of possible TCA, but Diam are by far the industry leaders, guaranteeing 100% TCA removal. Diam have a cork for still wines, sparkling wines and spirits and all are marked with the Diam name, so once you’ve pulled your cork, you can tell if it was neutrally sealed. Their sparkling wine cork is called Mytik and, according toÂ Diam, “is the only cork closure which offers both a perfect homogeneity between one bottle and another and an optimised sealing quality.”

The true appeal to Champagne producers is the promise of TCA removal. Mytik Diam corks are TCA taint-free (below the limit of quantification of 0.3 mg/l), can be easily removed from a bottle and guarantee dimensional recovery of the cork’s mushroom shape.

Another champagne house exploring Mytik Diam is Louis Roederer. When we met with Cellar Master Jean-Baptiste LÃ©caillon, he told us they had trialled Diam corks and were impressed with their performance, commenting: “the only question is time”. Louis Roederer are already closing all half bottles with Mytik Diam and will do the same for all future disgorgments of Brut Premier NV and Brut RosÃ© NV, however any champagne destined for a long-time release will not be sealed with Diam, as there is “not yet enough evidence of the long-term effects”, according to LÃ©caillon.

Interestingly, Dom PÃ©rignon switched to Diam corks and then switched back. That hasn’t deterred other producers though – an estimated one in six champagne bottles are now sealed with Mytik Diam corks and many other houses are currently experimenting with technological corks. It will be interesting to see who else makes the transition over the coming years.

You can find more information about the Mytik technological cork on the Diam website.