Arriving at 18 Grosvenor Gardens is always a pleasure because bubbles await. However, rarely are the bubbles of such eminent calibre. On entering, the chatter of guests and the clinking of glasses could be heard from above. Ascending the stairs, the picture was complete: a throng of wine lovers, journalists, wine professionals and Champagne aficionados was enjoying an enviable array of aperitifs: the beautiful 2004 vintages of Dom Pérignon, Dom Ruinart Veuve Clicquot La Grande Dame, 2003 Krug and the Krug Grande Cuvée. After all, this was a special celebration: the launch of The Finest Bubble, a new-concept Champagne venture in London specialising in vintage and prestige cuvées of the world’s favourite fizz. Even at 18 Grosvenor Gardens, something like Champagne HQ in London, the offices of Moet Hennesy UK, under whose mantle such illustrious names as Moët & Chandon, Dom Pérignon, Krug, Veuve Clicquot and Ruinart are united, this is not an everyday occurrence. 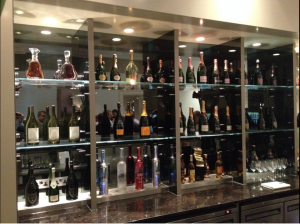 A glass was immediately proffered – and take note, not a flute but a proper white wine glass in which the evolved aromas of these fine wines could be nosed properly. Half the joy of Champagne, as in fact of every other wine, is in its smell. This is even more true of fine and vintage Champagnes: scents of citrus, brioche and chalk, of honey and oatmeal can be discerned and also much more fleeting things: a suspicion of wild strawberries, of wet earth or of fir honey. Such impressions of course beg to be documented: many a Champagne fiend was scribbling down tasting notes, in small, black, well-used Moleskine books, on the small tasting sheet, on tablets and laptops. Lifting my head to breathe in and contemplate the particular scent of the Dom Ruinart alerted me to beautiful, tall bouquets of dark amaryllis. Champagne in itself is a pleasure but one that is even more enriching in beautiful surroundings. Exquisite, small canapés were served, another element of pleasure. Amidst many friendly encounters and the exchange of fizz-focussed impressions this aperitif hour passed quickly.

Ushered into the adjoining salon, we took our seats around small, round tables. All set with glasses and note paper. Finest Bubble founder Nick Baker spoke a few words but handed over speedily to Richard Bampfield MW who was to be our master of ceremonies for a horizontal tasting of the 1998 vintage.

As the first wine was poured – 1998 Blanc de Blancs Dom Ruinart from magnum no less – Richard’s confession resonated with all of us: “I love Champagne tastings,” he admitted and ascribed “a very natural balance” to the 1998 vintage. His pace was perfect: rather than talking over us, he gave us all time to taste for ourselves, to savour and to get a first impression. What was in the glass was fresh and sprightly – with a distinctly chalky minerality and still fresh citrus. Richard even suggested that this 16-year-old wine may not be at its peak yet. I would agree: the flavours of evolution, development and full maturity of a wine are acquired tastes, we have to learn to appreciate them since they no longer are just of freshness and primary fruit. They are far more interesting and layered, they introduce far more abstract notions, of stone and earth, of age and many other indescribable thing; impressions that we struggle to put a name to but which are eerily familiar once we allow our minds to return to those places where we may first have encountered them: perhaps it was a walk when rain moistened a sun-dried chalky path through a field, perhaps when we first opened an old manuscript and smelled the parchment for the first time… See, this is what good wine always does, it takes us on a journey. 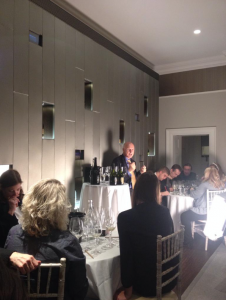 What followed then was eye-opening: the next two Champagnes were poured side by side. In fact, the only way to learn about wine, any wine, is to taste it side by side with its peers and to fathom both what unites and differentiates them. In our glasses were Dom Pérignon 1998 and Dom Pérignon 1998 P2. To explain: P2 stands for ‘second plenitude’, a concept introduced by Dom Pérignonearlier this year which replaces its former Oenothequeseries and puts the focus on vintages aged on their lees for extended periods and disgorged late. VintageChampagnes, of course, are also aged longer than NVs, however, Dom Pérignon 1998 was first released in 2005 with subsequent disgorgements, so the ‘straight’ vintage 1998 bottle had somewhere between seven or eight years on lees plus eight or nine years of bottle ageing, whereas the P2 had somewhere between 13 and 14 on its lees and a year or two of bottle age. The difference was like night and day, truly astonishing. DP 1998 was everything a mature vintage Champagne should be: rounded, generous with rich autolytic aromas of rye bread crumbs, brioche crust and lots of citrusy yet rounded chalkiness.

The P2 was a lifted, heady marvel with top notes that to me were reminiscent of pine needles and bayleaf – something exquisitely and ethereally aromatic. It was as fresh as a daisy, straight, soaring and poised – yet with undeniableand chalk-anchored depth. It was an object lesson in lees ageing versus bottle ageing. Which one was the better? That is impossible to say of these siblings that shared abirth year – just like siblings in real life they were simply different. While my personal preference was the fresh, streamlined P2, I could easily imagine drinking both of them: the DP 1998 with firm white fish and a rich sauce, perfumed perhaps with a little truffle or morel. The P2 would have been the perfect foil for tuna sashimi or something equally fresh but exquisitely simple. To taste these wines side by side and to discover what a great wine the P2 is, was the highlight of the evening, no, of the entire week. What a delicious way to learn new things!

Next up – while we were still getting our heads around those astonishing siblings of DP – was the Krug 1998. Richard pointed out that unusually, in the 1998 vintage, Krug was dominated by Chardonnay. It was yet another incarnation of Champenois excellence: here we had a savoury wine with a fascinatingly long and nuanced finish: a salty notion and developed umami notes that are also prevalent in soy sauce. Exquisite concentration and vigour corseted the richness of the palate. Here is a Champagne that cries out for food, it would be an ideal match for delicate veal or even lighter game birds.Our last wine of this sensational vertical was Veuve Clicquot’s La Grande Dame Rose 1998. Here Richard delved a little into the history of rosé Champagne, its tentative beginnings, chequered trajectory and eventual success. The great lady’s usually rosy hues had turned to salmon pink and where there once were fresh, wild strawberries there now appeared wonderful notions of dried cranberry and crushed rose petals. It reminded me how often rosé Champagnes are drunk far too young – but then again, who could be blamed for doing that? Perhaps the only solution is to buy enough to drink it both young, mature and white it is developing.

By now, we had five glasses in front of us and we were able to go back and forth, smell and taste again. The Champagnes had developed in the glass, had become themselves even more. They were clearly distinguishable, like four personalities added to our table. Had we had another ten Champagnes there would have been another ten distinct personalities. Champagne is like that – but even more so than other wines it is joyous. The bubbles add extra vigour; life and energy. People talk of Champagne in the singular – perhaps we should all start to talk of it in the plural – Champagnes – because each and every one is different and totally worth encountering. 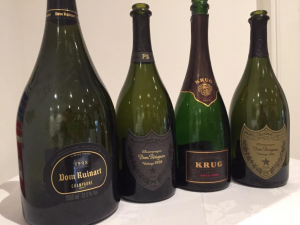