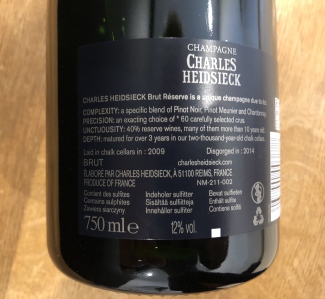 The most traditional style of champagne is non-vintage, which accounts for around 90% of all champagne production. For this reason, the non-vintage champagne is the most important in every producer’s portfolio. Every spring, once the grapes of the previous harvest have been pressed and the resulting musts fermented to produce still wines, the winemaking team will begin the process of blending.

Every house has a unique style and year on year, the challenge for the winemakers is to reproduce this consistent style whilst maintaining high standards of quality. This is achieved by blending a variety of wines (sometimes over 100) from multiple different vintages. Consequently, non-vintage champagne is sometimes referred to as multi-vintage.

Whilst wine from many different vintages goes into the blend, a large majority (typically 60-90%) will come from the current vintage. The remaining 10-40% is made up of older reserve wines, usually from the most recent past vintages, but occasionally decades old. The vintage from which the majority of the wine in a non-vintage blend originates is referred to as the base year, or base vintage.

Although the winemakers successfully manage to recreate a very consistent style and quality with their non-vintage year on year, the final blend inevitably displays subtle characteristics of that base year. When visiting Charles Heidsieck with Jancis Robinson MW in August 2017, Chef de Cave Cyril Brun showed us two bottles ofÂ Charles Heidsieck Brut RÃ©serve NVÂ – one based on vintage 2008 and the other on vintage 2010.

Where the 2010 base was quite rich, round and welcoming, the 2008 base was more tight, tense and full of future potential. Despite being two years younger, the 2010 base was much readier to drink than the 2008 base, which has benefitted from some cellar ageing since. Knowing which vintage your non-vintage champagne is based on (alongside the date it was disgorged) therefore gives an indication as to its ageing potential.

As consumer thirst for knowledge continues to increase, recognising each year’s non-vintage champagne as an individual creation is slowly becoming the status quo.Â Krug Grande CuvÃ©e NVÂ for example, is now released as a numbered edition every year, giving each blend a unique identity. Although not all producers are quite as forthcoming, the back label of a bottle can sometimes give a clue as to the base year. Some labels will display the year in which the champagne was bottled (also calledÂ tirage) or the year in which it was ‘laid in chalk cellars’. The base vintage is likely to be the previous year.