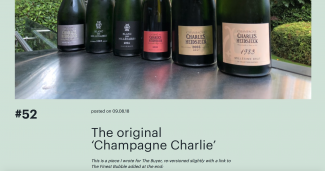 Renowned wine presenter and journalist David Kermode attended our Charles Heidsieck Dinner at Frederickâ€™s last week to learn all about the quiet revolution happening at this once-legendary champagne house and taste a range of new and old vintages.

“Little did I realise â€˜Charlieâ€™ was no mythical bon viveur, he was actually a real person:Â the enterprising and extraordinary Charles Heidsieck, who earned his moniker introducing America to Champagne in the latter half of the nineteenth century.”