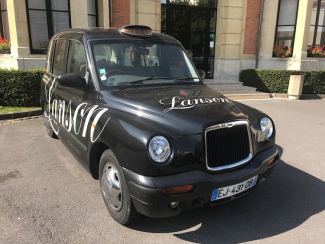 Lanson’s Black Cab – a symbol of their British connection

The only thing more impressive than the champagnes on offer at a tasting with HervÃ© Dantan is the service provided by the man himself. Champagne Lanson’s head winemaker is a one-man hospitality team: expertly fetching, serving, pouring and presenting his wines alone. It was a testament to his generosity that he met with us on the morning of August 28th, the day his team had commenced picking in the Aube and the day before they were scheduled to pick the unique single-walled plot Clos Lanson.

Dantan began with an overview of the 2017 season. “The climate between March and August was very strange, ” he told us. Explaining that 2017 has seen the highest acidity levels since 1996 and 2008, he observed that the “Chardonnay seems better than the Pinot Noir” at this early stage. Although other producers had spoken of issues with botrytis, Dantan said it wasn’t a concern for Lanson vineyards. Acknowledging with a smile the winemakers’ tendency to “always say this vintage is very different”, he assured us that 2017 is in fact “very different.”

Our visit to Lanson however, was an exploration of the past, not the future. Whilst the primary focus was research forÂ our upcomingÂ Prestige CuvÃ©e vs Vintage tastingÂ with Jancis Robinson MW, Dantan had prepared a time-machine tasting that took us from the vins clairs of the previous year to a non-vintage from the 50s!

First up was a vertical tasting of the all-Chardonnay prestige cuvÃ©e Noble CuvÃ©e Blanc de Blancs. The concept is to blend only Grand Crus – Avize, Chouilly, Cramant, Le Mesnil-sur-Oger and Oger – and to produce a wine that will age for a very long time. The current vintage is 2002 and the first was 1989, both of which Dantan kindly shared with us. 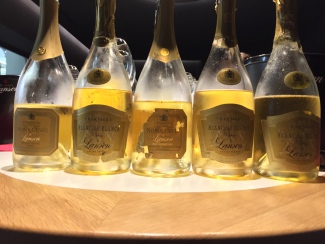 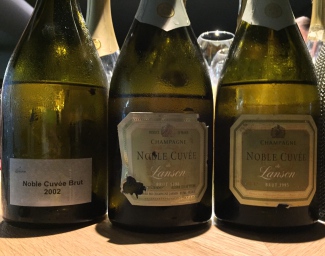 Asked if it works commercially to produce a longer ageing range such as Noble CuvÃ©e (indeed we reported in February 2017Â that Noble CuvÃ©eÂ Blanc de Blancs 2002 was the last prestige cuvÃ©e ’02 to hit the market – some eight years after the first), Dantan responded positively. “When you have a Grand Cru profile like this, it takes a long time post-disgorgement to develop. There is a market for this.” 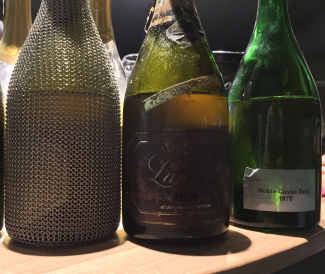 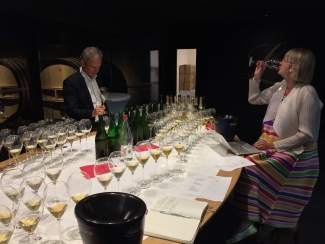 We started our non-vintage journey with a look at vins clairs blends with the previous three harvests as a base vintage: 2016, 2015, 2014. We tasted the finished blend of Black Label NV with 2016 as a base year back in March and were struck then by its roundness and complexity – no doubt a consequence of Dantan’s introduction of malolactic fermentation – qualities that have developed nicely over the last six months. The 2015 blend was a powerhouse as could be expected, while the 2014 was packed with acidity but a little subdued.

Moving onto the bubbly blends, Dantan explained that Black Label is a multi-vintage champagne containing wine from over 100 different villages and reserve wine from up to ten different vintages. Asked how much experience it takes to make decent champagne-blending decisions, Dantan responded humbly: “10 years is a good start.” The blend currently sold on the market is Black Label NV based on 2013. 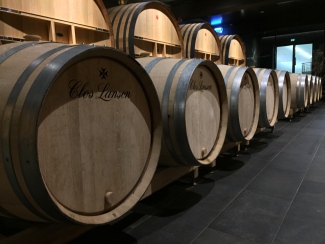 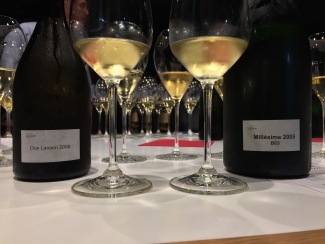 Finally we reached our research project – a comparison of the House ‘standard’ brut vintage champagne and the top-of-the-shelf prestige cuvÃ©e, Clos Lanson. As a brand new champagne released just last year, there is currently only one vintage of Lanson’s ultimate prestige cuvÃ©e released –Â Clos Lanson 2006. Thus, we could only conduct one comparison, which we did with the current magnum release of their brut vintage, Gold Label 2005. Commenting on the recent introduction of malolactic at Champagne Lanson, Dantan explained: “If we have a vintage, we know it is well-balanced, so there is no need for malolactic. We only do it on non-vintage.”