In March, we met withÂ Veuve Clicquot’s current Chief Winemaker, GaÃ«lle Goossens, to get an overview of vintage 2017. Goossens, who joined the house from Bollinger in 2016, is a true oenologist. Young and progressive, asÂ she shared her vision of winemaking for the future, her passion for improving the art of champagne production was evident. “We need to bridge the gap between the vineyards and oenology,” she told us. Goossens believes that by focusing on the main material of their trade – wine, oenologists have been overlooking the initial ingredient – grape. “We should focus more on the vineyard… by looking at amino acids and which tastes each specific acid produces,” she added.

This proposed merge of oenology and viticulture is a fascinating perspective. Given the rate at which technology in winemaking is advancing, a future in which taste profiles can be predicted from the biochemical structure of vines – long before the wine itself is produced – is not a wholly unimaginable concept. That said, such technology may not have helped in 2017, where the timing of the harvest caught the region off-guard.

“We are not used to early harvests in Champagne… we don’t know how to deal with the maturity,” Goossens said. The harvest came as a surprise to many last year, with some growers even on holiday in late-August, when picking started. “Everyone was panicking during the harvest,” she said. Unfortunately, due to the wet, hot and humid weather in August, botrytis had spread throughout many vineyards and the effect on the grapes was tangible. “We had to refuse delivery of a lot of grapes,” Goossens told us, reflecting what we’d heard at other houses. As such, sorting of the grapes this year was key. The Veuve Clicquot philosophy? “If you wouldn’t eat the grape, then don’t use it.”

Introducing the vins clairs, Goossens summarised 2017 as a “a difficult year, but good for Chardonnay.” The Chardonnay we tasted was from Chouilly, an area fortunately unaffected by rot last year. The wine was clean, fresh and rich and consequently featured heavily in the 2017 Yellow Label NV blend. Both the Pinots we sampled were from the VallÃ© de la Marne. The Pinot Meunier was from Souilly, a small village to the east of the region that was amongst the least affected last year. However, it was the Pinot Noir that bore the brunt of the weather. The base wine we sampled was from AÃ¿, a typically high-quality Grand Cru that succumbed to widespread rot in 2017. “Heavy rain followed by warm sunshine created tropical conditions for 44 hours, which didn’t help,” Goossens said.

In some of the worst cases last year, the impact of botrytis on the grapes was visual. However, the most common detection methods are unsurprisingly smell and taste and there are two undesirable qualities in particular that winemakers in Champagne look out for. The first is ACF (ArÃ´me de Champignon Frais), which translates as ‘fresh mushroom aromas’ and is detectable on the nose. The second is GMT (Les GoÃ»ts Moisis Terreux), which means ‘earthy, mouldy, flavours’ which are noticeable on the palate as a musty, mildewy taste.

ACF and GMT appear to be on the rise in the region. The percentage of wines that Clicquot are noticing them in has risen from 5% in 2009, to 12% in 2011, to over 30% in 2017.Â “Some musts [last year] seemed okay initially, but the aromas came back around November/December,” Goossens said. The winemaking team had to taste all of the wines for the Yellow Label NV blend three times – they kept changing their minds about the same wines as they kept evolving. 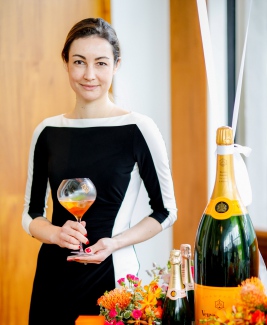 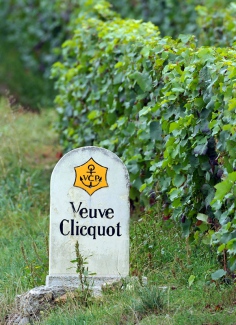 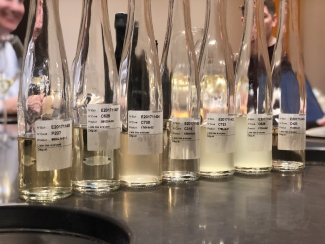 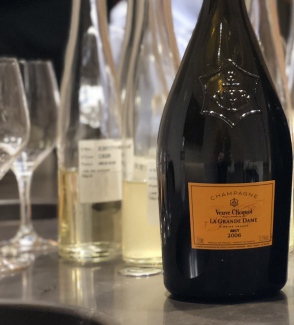 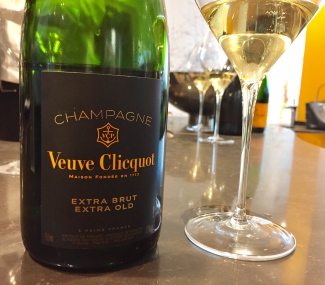 Before tasting the 2017 Yellow Label NV blend, we sampled a few reserve wines that contributed to it. All Pinot Noirs, the first was from Ambonnay 2015, a vintage of which Goossens is particularly fond – although it seems to be maturing very quickly. The second was from Very 2008, the darling vintage of the century that can do no wrong. The final reserve was a prized blend of wines from the Aube 1996. Despite being two decades old, it was tasting surprisingly fresh still, though very rich and with a remarkable fusion of fresh fruit aromas. This wine contributed to the firstÂ Extra Brut Extra Old NVÂ blend and a very small amount features in the new Yellow Label NV.

Difficult though the harvest may have been, Veuve Clicquot’s impressive reserve wine stock means they can not just survive, but even thrive, in the harshest of seasons. Due to the poorer quality and lower yield of the crop this year, the reserve wine content of Yellow Label NV has once again increased, following a trend in recent years. “In 2015, it [the reserve wine] was 40%, in 2016 it was 45% and in 2017 it is 48%,” Goossens told us. The oldest wine in the blend was from 2009 and less than 1% of the wines were aged in barrel. We have to say the final blend is mightily impressive – rich and already quite mature (a consequence of the high percentage of reserve wine), we look forward to tasting it with bubbles in a few years time.

In summary, 2017 will not be a Veuve Clicquot vintage year. Although they experimented with the idea of making a Blanc de Noirs, Goossens said it was too difficult to find great Pinots. Looking forward to 2018 though, Goossens remains optimistic. “When we have a tough and cold winter, we typically have a good, warm summer,” she said.

To conclude our visit, we tasted some current release finished champagnes:Â Extra Brut Extra Old NVÂ andÂ La Grande Dame 2006, and an old bottle ofÂ Cave PrivÃ©e 1982. Speaking of EBEO, Goossens informed us that it wasn’t originally intended to be an Extra Brut. However, after tasting the blend, the winemaking team decided it only needed a small dosage – so just 3 g/L was added. This new champagne was a real success story for Clicquot and the next blend will likely be met with similar excitement. We will have to wait some time though – bottled in 2016, the second EBEO will likely not be released until 2019 or 2020.