Tasting with Veuve Clicquot’s distinguished cellar master Dominique Demarville is always an insightful experience and our 2018 vins clairs visit was no exception. Rather than simply showcasing the most impressive wines of the harvest, Demarville prepared an educational tasting, sharing wines from all over Champagne. “These are not the best of the best… it isÂ a picture [of the vintage],” he told us. “Some of them are exceptional, some of them are goodâ€¦ none of them are bad!”

Veuve Clicquot were one of the first houses to start picking last year, commencing with the Chardonnays in the village of MontgueuxÂ on 23rd August 2018. Demarville explained that, as they do not know which plots are going to be kept as reserve wines during harvest, he looks for 10.8-11 degrees potential alcohol in the grapes: “At this alcohol level they will age well.”

Even though they started early, Demarville acknowledged that one of greatest challenges last year was ensuring that nervous growers did not pick too soon. “In 2017, the grapes were damaged so quickly… therefore people wanted to pick early this year,” he said.

Overall, Demarville seemed pleased with the harvest: “This is aÂ good year for the Chef de Cave, definitely much better than 2017.” The average pH was between 3.10-3.19 and Demarville did malolactic fermentation on almost all of the wines, blocking the process on just 10% of his supply. “I am very confident of the ageing potential of the 2018 wines,” he added.

As we’d discovered elsewhere, the variance in character between each base wine at Veuve Clicquot was substantially more pronounced than usual. “The differenceÂ between each house is usually quite large,” Demarville said. “This year, the different plots on different slopes and from different supplies in each village show very different characteristics.”

Of the grape varieties, Demarville’sÂ preference was for the Pinot Meunier, but he noted that “the Pinot Noir is also very good”, whereas “the Chardonnay was the most challenging.” The first still wine we tasted was the premiÃ¨re tailleÂ (the 500 litres of juice pressed after the cuvÃ©e, the first 2,050 litres), which is not typically used in champagne production due to itsÂ lower acidity and higher tannin content. The blend we tasted was a ‘black taille’ – a blend of Pinot Meunier and Pinot Noir grapes – 12% of which went into the 2018 Yellow Label NV blend.

The Pinot Noirs were remarkably forward, already quite mature with incredible freshness and ripeness. Demarville told us that the great success story in 2018 was the region that stretches across the northern Montagne de Reims, running from Ville-Dommange in the west, to Verzy in the east. “It was the perfect year for this area,” he said, singling out Verzenay in particular as one of Veuve Clicquot’s very best vins clairs.

Although more challenging than the other varieties, the quality of the Chardonnays was by no means poor. Complete and round, with impressive volume, acidity and surprising spicy notes, the four examples we tasted were very good. Montgueux, the village where Clicquot began their harvest, was our pick of the bunch – it was usedÂ to bring energy and freshness to the Yellow Label NV blend.

We finished our base wine tasting with the completed Yellow Label NV blend. The reserve wine content this year is just 26% (the oldest wine being Le Mesnil-sur-Oger 2001), exactly half the 52% used in last year’s blend – a testament to the power and maturity of the 2018 wines. Indeed, this year’s assemblage is marked by an abundance ofÂ fruity generosity, great length and a delightful crispiness.

We also sampled red wine from the famous Clos Colin, a 1.5 hectare plot located in the Grand Cru village of Bouzy. This warm, south-facing parcel sits on prime mid-slope soil and is notorious for producing Pinot Noir of astounding richness and complexity, so good that Veuve Clicquot produce a still red wine from the grapes.

Our visit concluded with a bottle of the recently released La Grande Dame 2008. As Clicquot’s prestige cuvÃ©e is produced only in the most exceptional vintages, La Grande Dame 2008 will be on the market for the next few years, to be succeeded eventually by La Grande Dame 2012, which, Demarville teased, “could be betterÂ than 2008.” 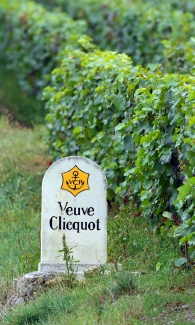 According to Dominique Demarville, “the challenge last year was ensuring that growers did not pick too soon” 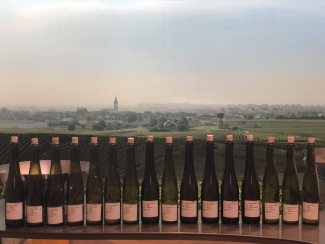 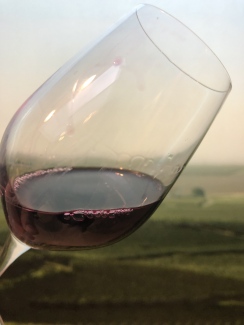 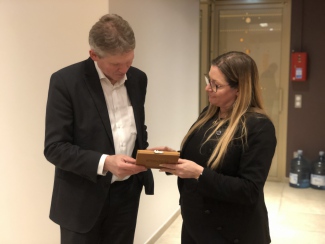 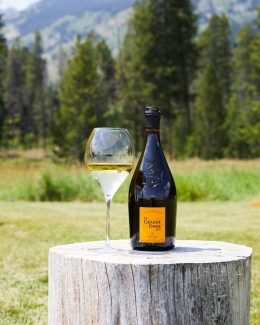