Dom Pérignon is the prestige cuvée of Moët & Chandon, but the production, style and sheer class of the wines are so distinguishable, the two brands are best considered autonomous. Dom Pérignon is produced on premises in Épernay and is based on a core of grand cru villages, including the oldest vines of the premier cru of Hautvillers, the historical and spiritual home of Dom Pérignon.

Richard Geoffrey, Chef de Cave, speaks of three ages of peak maturity in Dom Pérignon's life; the first after 7-8 years (the standard release - currently the 2006 vintage), the second at 12-20 years and a third at 35-40 years. Dom Pérignon makes these mature vintages available through extremely limited 'Oenothèque' releases, representing just 1-2% of only the most age-worthy vintages. Oenothèques are an attestation to the battery life of energy and youth contained within the lees in a bottle of champagne, capable of sustaining a bottle for a lifetime.

Since Moët & Chandon first produced its prestige cuvée in 1921, Dom Pérignon has enjoyed extraordinary brand recognition and worldwide distribution. 'The Dom' is a wine of tension, power and long-aging endurance and has been the vision of the talented Richard Geoffrey for over two and a half decades.

Released five months after the 2005 vintage, Dom Pérignon 2006 is the fifth consecutive release from the label since the 2002. This vintage is being earmarked to be exceptional with near perfect growing conditions culminating in Champagne that is sure to improve with age. Early indications suggest that this Champagne is set to get better and better, and in time formulating a reputation and awe like the 2002 vintage.

Antonio Galloni, of VinousMedia.com, has already shown his appreciation of this fabulous vintage with a staggering 97/100 (1 point higher than his original score for the 2002) and commented, “The 2006 Dom Pérignon is a beautifully balanced, harmonious Dom Pérignon that strikes and incredibly appealing stylistic middle ground.” With resemblance of both 2002 and 2004 (two incredible vintages) this latest release will have it’s time in the spotlight now and certainly in the future.

Richard Geoffrey, Chef de Cave at Dom Pérignon has spoken about the 2006 vintage "There's a deep harmony to this tightly wound Champagne that promises a beautiful evolution. It’s likely that the 2006 will be one for the ages." 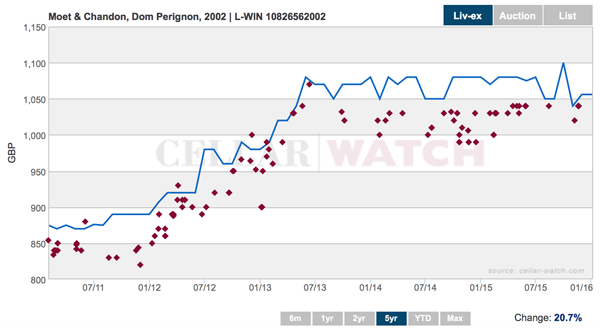 Dom Pérignon also experiences an excellent vintage premium, increasing extensively in value with age as supply diminishes; crucial for investment potential. As the table below shows, the 1998 vintage (which scored lower than the 2005 and is generally considered an average Dom Pérignon) is already valued at £700 - a 103% increase on its release price.

Antonio Galloni, VinousMedia.com – 97/100 - “The 2006 Dom Pérignon is a beautifully balanced, harmonious Dom Pérignon that strikes an incredibly appealing stylistic middle ground. Rich, voluptuous and creamy, the 2006 shows off fabulous intensity in a style that brings together the ripeness of 2002 with the greater sense of verve and overall freshness that is such a signature of the 2004. Bass notes and a feeling of phenolic grip on the finish recall the 2003, as the Pinot Noir is particularly expressive today. After an irregular summer that saw elevated temperatures in July followed by cooler, damp conditions in August, more favorable weather returned in September, pushing maturation ahead and leading to a long, protracted harvest. The 2006 falls into the family of riper, more voluptuous Dom Pérignons, but without veering into the level of opulence seen in vintages such as 2002.”

Assi Evellan MW, EssiAvellan.com, - 96/100 - The 2006 is a bold and ripe Dom Pérignon full of exuberant tropical fruit and vanilla notes, topped up with the hallmark fragrant, gunpowder and toast character. It has a broad, rich mid-palate and a truly dry, salient finish with a phenolic touch of a ripe year. The fruitiness is polished and bright and there is fine, balanced freshness to it. This vintage is built to last, it is still tight but packed with fleshy fruitiness. ”

Customers who purchase from The Finest Bubble and cellar with us will have access to independent valuation data from Liv-ex for Champagne held in their reserves through an online personal account. When you come to sell your Champagne, The Finest Bubble may make an offer to buy depending on market conditions, however you are not tied to selling through us. If you need us to assist in selling the champagne we can do this for a 4% charge. There are no costs for providing this valuation information.

We have presented information that shows the historical case for Dom Pérignon as an investment and any forward looking statements are forecasts and not guarantees. Since the value of any investment can go down as well as up we recommend you consult with an accredited financial expert before making investment decisions.

We are able to help you with our opinion on what champagnes and which vintages we believe offer the right qualities to consider cellaring for 5-10 years and help with up to the minute market data showing valuations, trends and transaction quantity for every champagne. We are not able to offer financial advice or advice on investments.