Champagne and Caviar have long been considered a perfect gourmet match. And since The Finest Bubble knows all about Champagne, it seems only right that we’ve teamed up with a company who know all about Caviar:Â London Fine Foods. Part of the largest caviar farming, wholesaling and retailing group in the UK, London Fine Foods are the largest international importer of caviar, partnering with caviar farms from Germany, France, Spain, Italy, and as far as Iran and China. Further, after seeking permission from HM The Queen, together with Exmoor CaviarÂ the group uniquely farms caviar and sturgeon meat products from their own Sturgeons in North Devon and are the first company to have produced a caviar or smoked Sturgeon food product from sturgeons in England since 1324.

They really are the foremost experts on caviar in this country and we love their products so much, we are now recommending our favourites. When viewing a Champagne on The Finest Bubble, you will see a ‘Caviar’ tab under the product description, which displays a few of our Caviar favourites:

The Imperial Oscietra comes from the Acipenser Gueldenstaedtii sturgeon, indigenous to the Caspian Sea and traditionally known as â€˜Russian Caviar.’ It becomes caviar mature at 10 – 14 years, bearing a firmer textured egg with a kaleidoscope of colours from warm brownie greys to dark golden yellows. We enjoy its wonderfully smooth afternote, though many state a nuttiness to its flavour.

The Imperial BelugaÂ (pictured below) however,Â is in a league of its own. Taken from the Huso Huso sturgeon (the largest sturgeon known to man –Â female Huso Huso can live up to 150 years old, grow up to nearly 12 meters in length and can weigh up to 2 ton in weight), the Beluga becomes caviar mature at a minimum of 18 years of age and the female’s caviar eggs are highly desirable: they are the largest and most impressive. Considered by connoisseurs to be ‘the best caviar’, each caviar egg is typically deeply rich in flavour, yet subtle on the palate, although the real prestige of Beluga lies in its luxuriously creamy after note, a delicacy that can only be found in real, well farmed, 100% Beluga Caviar. 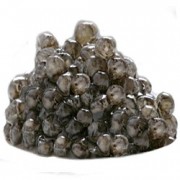 For the caviar beginner, London Fine Foods offer a fantastic Caviar Taster Set, allowing newcomers to taste a range of 3 caviar types and assess which variety is their favourite: including Classic Oscietra, Imperial Oscietra and Royal Beluski. 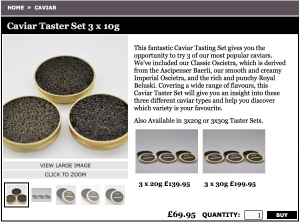 Once you’ve discovered your favourite caviar, be sure to try this delicacy alongside Champagne. The deliciously salty flavours of the caviar are wonderfully enhanced by a dry, lively Champagne.

We recommend Dom PÃ©rignon 2002, a Champagne that at 13 years of age is now starting to really develop the magnificent complexity that Dom PÃ©rignon is famed for. Already tipped as ‘the vintage of the century’, and described as ‘LVMH at its very best’ by Jancis Robinson MW (who rated it 20/20), Dom PÃ©rignon 2002 is one of a kind and its dried fruits flavours rounded off by smoky and toasted qualities are a perfect compliment to the Imperial Beluga. With similar creamy and warm after notes on the palate, you’ll be left wanting more and more of both.

Nothing beats the winning combination of Champagne and Caviar to wow guests, entertain friends or simply to treat yourself!