As weÂ pulled into Taittinger’s 4th century Roman cellars in Saint Nicaise, the sun broke over the horizon for the first time in our 48 hours in Reims, lending a mythical glow to the sacred grounds of this ancient abbey. A positive sign of a magical tasting to come? We certainly hoped so – it was still only mid-afternoon and Taittinger were the fifth house we’d visited that day. We couldn’t possiblyÂ complain about a star-studded whistle-stop tour of Champagne’s biggest names though, so another quick application of tooth mousse was the go-to solution for any dental side effects of the acidic Vins Clairs. 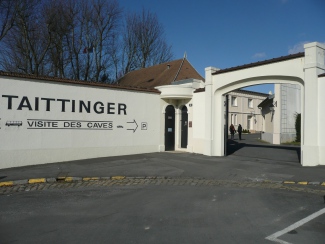 It’s been a strange millennium so far for Champagne Taittinger. Sold in 2005 to an American private investment firm, the house was bought back by the family less than a year later, after many in the industry claimed that the arrival of foreign investors could disrupt the equilibrium of the market. Heading the take(back)overÂ was Pierre-Emmanuel Taittinger, grandson of the founder, who continues to oversee the company today as President. The house now remains firmly under family control with Pierre-Emmanuel at the helm, son ClovisÂ heading up the export team and daughter Vitalie managing global marketing.

With Clovis seemingly never in one country for more than a few hours, it wasÂ Vitalie who greeted us at the cellars earlier this month. Alongside Vitalie and Essi Avellan MW, we tasted the 2016 Vins Clairs with Chef de Caves,Â LoÃ¯c Dupont and Managing Director,Â Damien Le Sueur. LoÃ¯c and Taittinger go hand-in-hand; he has worked with the house for over 25 years, the last seventeen of which have been spent as Cellar Master. Similarly Damien is also a Taittinger veteran, leaving his post at theÂ CIVC to join the house back in 2007. 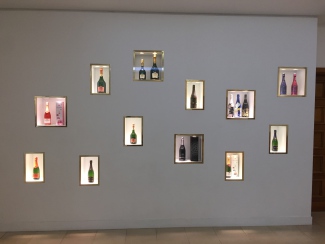 Looking more like a milkman more than a winemaker, LoÃ¯c arrived in a warm coat with a crate of unmarked bottles in hand – he’d clearly just drawn today’s samplesÂ from the cellar. All business, he invited us straight to the tasting room,Â where we were to gain an insight into 2016 from Taittinger’s perspective.

“Taittinger will definitely make a 2016 Comtes de Champagne,” LoÃ¯c began, positively. “The Chardonnay was very closed at first, very tight – but it opened up and transformed in January.” Like other winemakers, LoÃ¯c and his team experienced great difficulty during the 2016 season. Unpredictable weather throughout the spring and summer led to undesirable losses, but the perfect harvest provided a miracle ending.Â Unusually, TaittingerÂ finished the harvest picking the Chardonnay grapes – which typically ripenÂ before the Pinot Noir – and LoÃ¯c sees much potential as a result of the Chardonnay’s delayed maturity. “Comtes 2016 will be made in small volumes, using the riper grapes picked towards the end of the harvest,” LoÃ¯c commented.

Being a Chardonnay dominant house, LoÃ¯c then guided us through a tasting of seven of Taittinger’s 2016 Chardonnay Vins Clairs. This included an interesting insight into an experiment LoÃ¯c is conducting on wine from Chouilly: we tasted three variations, one from vat and two from barrel, each containing differentÂ parcels from the same village. 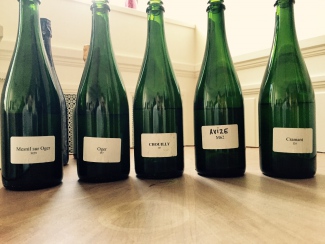 Chardonnay
Avize CÃ´te des Blancs
Loads of bright lemons and ripe apple and pear with hints of spiciness. Very bright acidity. Ripeness and weightÂ of fruit really standout in this one. Some nice spicy cooked apple flavours on the finish.

Cramant CÃ´te des Blancs
Loads of dry apple and bright lemon notes.Â This is quite lees-y atÂ present,Â will benefit from time. 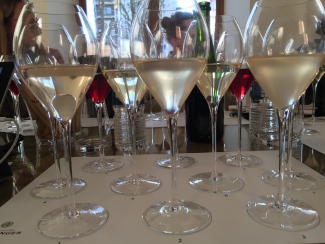 ChouillyÂ CÃ´te des Blancs
From vat. This has loads of lemon and green peppers, great mouth-feel. Quite lean and a veryÂ slight hint of reduction.

Noticing our pleasant surprise at the intensity and structure of the Chouilly from barrel, LoÃ¯c told us that only a tiny percentage is kept in oak, something Taittinger started doing with the 1998 vintage. Vitalie commented that the wine develops a “softer texture and vanilla flavour” over time in barrel.Â “We recycle barrels every 4 years,” LoÃ¯c continued. Each barrel’s lifetime is closelyÂ tracked, and LoÃ¯c follows individual wine’s oak exposure carefully. “It is very interesting to see how the impact of the oak barrels diminish as they get older,” he added.

We must have looked suitably impressed, as Damien then took the opportunity to promote Tattinger’s move towards biodynamic farming. With Pierre-Emmanuel currently President of Champagne’s UNESCO project, the family clearly care dearly for the delimited region. And this is beginning to be reflected in their increasingly organic approach to viticulture. “We use no insecticides, we’ve halved pesticide use recently and haven’t used herbicides for 4-5 years,” Damien boasted. 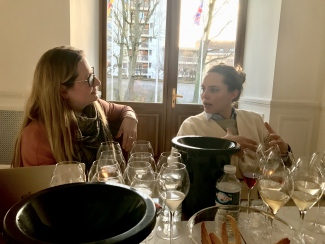 Commenting specifically on the style of the 2016 vintage, LoÃ¯c said: “This is a good year for freshness. There is also great citrus content and the wines are quite rich.” We have to agree, all of the base wines we tasted displayed incredible texture and balance. LoÃ¯c informed us that Taittigner’sÂ principal crus,Â Avize and Mesnil will contribute 50-60% of the Comtes de Champagne blend; Avize bringing the elegance and finesse and Mesnil adding structure. Roughly equal amounts of Oger, Cramant and Chouilly will then make up the remainder of the blend. Whilst clearly very optimistic, LoÃ¯c was hesitant to comment directly on CdC 2016’s potential: “It is best to compare 2016 when it is ready for selling,” he added with a smile.

Vitalie was keen to highlight that every stage of creation at Champagne Taittinger is a team effort, emphasisingÂ Damien’s role in the blending process in particular. “Before LoÃ¯c, Damien must purchase the best grapes – he is the architect!” As talk had turned to business, Damien conceded that his job wasn’t getting any easier. “Grand Cru and Premier Cru sites are becoming increasingly difficult to purchase,” he admitted. “However, the smaller villages enjoy beingÂ mentioned and acknowledged individually – Taittinger can offer prestige recognition.” 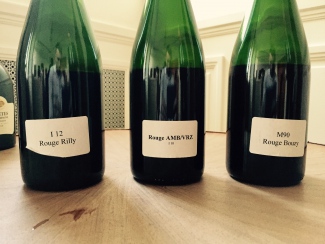 We then tasted three red wine blends; an experience we were told was a first for a Taittinger Vins Clairs tasting. Our suspicions that this wasn’t a move intended purely for the benefit of our palates were later confirmed when we found out that Taittinger are re-focusing on communicating theÂ “RosÃ© gastronomique”, as Damien referred to it. The plan for re-branding the image of Taittinger RosÃ© is to reduce the red wine content – typically around 15% – bringing theÂ Chardonnay (Taittinger’s hallmark) to the forefront. Damien believes this will make RosÃ© Champagne “lighter and more approachable.” The ultimate aim for Taittinger is to create a RosÃ© that can be identified as a RosÃ© in a blind tasting (using a black glass). “We are focusing on the mouth-feel, you should be able to taste the RosÃ© without seeing it,” Damien added.

BouzyÂ Montagne de Reims
Not made by Taittinger,Â made by the producer in Bouzy. A lot ofÂ power and beautiful blackberry notes. Lots of dark cherry flavour, this is Comtes RosÃ© all over. Very nice. 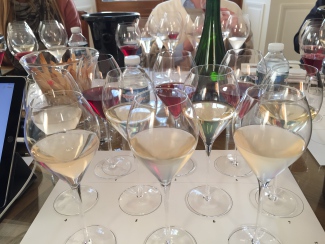 All of the base wines tasted: 2016 Vins Clairs atÂ theÂ front and red winesÂ towards the rear

JudgingÂ by the wines we tasted, we think Taittinger should be increasing the red wine content of their RosÃ©, rather than the opposite! But we’ll leave that call to the experts. LoÃ¯c explained: “You need wine with a

certainÂ structure to age Comtes RosÃ© properly.” This change in style will certainly be an exciting development to follow, however with the 2014 vintage being the first to witness the difference, it will be another 12 years or so before we get the chance to taste it.

Next, we tasted the current CdC vintage:Â Taittinger Comtes de Champagne 2006. Released nearly 2 years ago now, 2006 was a remarkable vintage for Taittinger. LoÃ¯c commented in late 2015:Â “I think the recently released 2006 vintage is possibly the closest stylistic comparison to emerge since the 2002.” And the critics agree. Jancis Robinson MW swiftly rated it 19/20 and Antonio Galloni gave it 97+/100. The bottle we tasted had a really subtle texture, but incredible lemon and grapefruit flavours on the palate. Fresh and light-weight, this is a Champagne of great serenity that is just gettingÂ better and better with time. 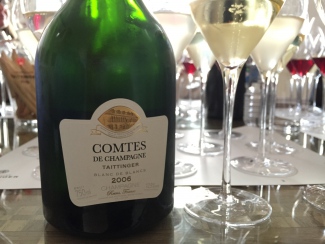 With our insightful tasting of the red wines providing a backdrop and context to the ingredients of LoÃ¯c’s blend, we then tastedÂ Taittinger Comtes de Champagne RosÃ© 2006. The bottle was quite cold at first, but its lovely nose of rose petals and cherry still managed to shine. Given time to warm, a lively palate of roses and redcurrant came through, with delightful pineapple notes on the finish. TheÂ dark cherry characterÂ seen in the still wine from Bouzy was remarkably evident here.

We took this opportunity to discuss Comtes de Champagne magnums, or lack thereof, with Damien. With a huge private market for magnums and awareness of their supremacy increasing, we have always found their rarity puzzling. Whilst admitting that magnum production is still extremely low, Damien did sayÂ that theirÂ volume has been steadily increasing in the last 5 years. “The demand was not there 10 years ago. Now there seems to be a private market developing,” he added. 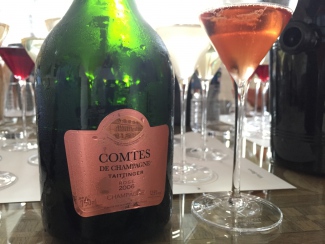 Before leaving, LoÃ¯c shared with us some more information about the future for Taittinger. Continuously striving to improve the standard of his cuvÃ©es, he told us that this years non-vintage will contain 20% Grand Cru grapes. “Without quality ingredients, you cannot make great wine. Think of it like a recipe; ingredients make excellence,” he commented. LoÃ¯c really puts the ‘chef’ in Chef de Caves and it will be a great shame when he retires after the 2018 harvest. Fear not though Taittinger fanatics, he has spent the last 3 years training his protÃ©gÃ©, imparting the trademark philosophy and style of Champagne Taittinger to ensure their great tradition lives on.

The businessman in Damien then took the floor, describing with great enthusiasm the house’s recent development and renovation activity. WithÂ 300 hectares, Taittinger are the second largest landowners in Champagne and produce 6 million bottles annually. As such, they found themselves – as we often do – in need of more cellarage space. Proud of their Reims heritage, it took Damien’s team a while toÂ find the perfect location, but eventually they did – purchasing a new site just 2km away for a cool â‚¬10 mill in 2010. 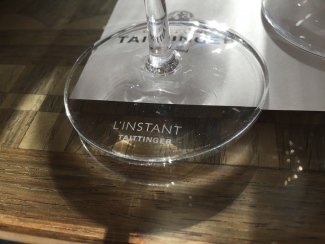 Taittinger have been using the new site purely for storage of reserve wines for the last 5 years, but Damien informed us that the next harvest will be managed atÂ the new winery.Â With a further â‚¬12 mill invested in the development of new disgorgement and bottling lines, the site will handle all production within the next 10-12 years. An ambitious project, Damien is clearly proud of Taittinger’s long-term development – and we’d hope so, given a totalÂ â‚¬60 mill has been invested in the last 15 years.

Overall, another sensational visit to a Champagne house embedded in the history of Reims. One of the last greatÂ houses to remain independent and actively managed by the family named on the label, what struck us most was their charmingÂ warmth and team mentality. Each contributingÂ their own vital ingredient to the greaterÂ Taittinger recipe, there was an endearing humility to the eagerness with which each others worth was promoted and shared. Watching Vitalie, LoÃ¯c and Damien interactÂ was more like witnessing an amicable family lunch than a huge corporate business at work. With the family holding the reins once more, the future remains bright for Champagne Taittinger. 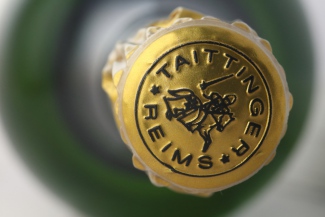