We drove towards Philipponnat from the east, having visited Laurent-Perrier in Tours-sur-Marne earlier that morning. Travelling adjacent to the meandering Marne River, the route passes through the small village of Bisseuil and gently curves into Mareuil-sur-AÃ¿. Rounding the bend, the first thing one notices is the staggeringly steep cliffside that the four-story house of Philipponnat is essentially situated against. Craning our necks, we could just about make out the blossoming vines of Clos des Goisses, the famous 45-degree sloped parcel that produces their prestige cuvÃ©e, and the region’s first, single vineyard champagne.

The house itself is light and airy with newly renovated, contemporarily designed reception rooms. We took a short tour through the cellars, much of which is storage space for their huge oak foudres, which vary in size from 15 to 30 hl (they have some 45 hl casks on order for 2020) and are on average five years old. They also keep a perpetual reserve blend (a proportion of which is aged in concrete) and are one of the few houses to still riddle most of their vintage champagnes by hand.

We departed the cellars up a gentle slope that was once an access route for horses, when equine transport was the norm for moving wine and equipment in and out of storage. The passage is nowadays more of a museum entrance, with faux bottles and riddling racks lining the sides. Cleverly, it exits into the shiny new tasting room where we were greeted by Charles Philipponnat.

For over 500 years the Philipponnat family have cultivated vines in their hometown and Charles, the sixteenth(!) generation, has been head of the house and custodian of their inimitable style since 1999. Softly spoken and highly experienced, Charles has an interesting opinion to share on all things winemaking and is, furthermore, a popular fixture on the region’s social circuit: we seem to have bumped into him at either a train station, restaurant or bar at least once during each of our visits this year.

We tasted a few variations of their non-vintage, which, in recent years, has phased out its Pinot Meunier content. “We need to update the labels”, Charles chuckled, typically laidback. They will soon be transitioning to base vintage 2015 for Royale RÃ©serve Brut NVÂ and its Non DosÃ© NVÂ sibling (the exact same wine without dosage). Charles described 2015 as a “very ripe vintage … beautiful grapes and healthy bunches … a small 2008, linear and intense at the same time.”

The Royale RÃ©serve RosÃ© NVÂ is produced by bending white wine with around 10% concentrated red wine. The Pinot Noir red wine comes from Clos des Goisses and the berries are completely de-stemmed. “It is light in colour, not much tannins or concentration, but a definite rosÃ©,” was Charles’ description.

Philipponnat have a strict dosage policy. The non-vintages are always given 1cl of liqueur (9 g/l) and the vintages are always given 0.5cl of liqueur (4.5 g/l). The philosophy behind this is to “let the vintage speakÂ … adjusting dosage is an industrial way of thinking.” They are also jetting all of their champagnes, toÂ evacuate oxygen from the bottleneck post-disgorgement and thereby reduce bottle variation. The viticulture is “95% organic … if we went for organic certification, we would have to stop using synthetics on mildew”, which, given Champagne’s wet and cold climate, is considered too risky by most producers. This balanced approach is often termed lutte raisonnÃ©eÂ (‘reasoned struggle’).

Moving onto the vintage range, which are all produced from premier and grand crus, Charles had some interesting takes on the quality of recent vintages. He considers 2012 one of the very best: “intense, savoury, very deep … a beautiful vintage for Pinot Noir.” He believes 2008 is a better 1996 and predicts 2012 will be a better 2002 (more balanced and less forward). Charles mused over whether the improvements are due more to simple differences in nature, or the progression of the Champenois, their understanding and their winemaking methods.

We sampled two vintages of their Grand Blanc, 2008 and 2009, both years in which it was still being produced in clear glass bottles that are prone to damage from lightstrike. They changed to dark glass bottles in 2016. Apparently, lightstrike can affect some vintages more than others: “2004 was particularly fragile, whereas 2008 is strong.” Three-quarters of the Chardonnay for Grand Blanc comes from the CÃ´te des Blancs (primarily from Vertus), with the rest coming from TrÃ©pail, Clos des Goisses, Avenay and Grauves.

The vintageÂ Blanc de Noirs, created as Philipponnat “pride themselves on being a Pinot Noir house … so we needed a Blanc de Noirs,” is 33-50%Â fermented in oak as this helps prevent early oxidation (which can be a problem with Pinot Noir). The grapes come primarily from home village Mareuil-sur-AÃ¿, as those from grand cru rated neighbour AÃ¿ are reserved for CuvÃ©e 1522Â – of which we tasted the blanc 2009 and rosÃ© 2008. Very similar blends, Charles described the 2009 as “needing more time to open up properly … all the Pinot Noir based 2009s have been reductive” and the 2008 as “quite acidic … more integrated [than 2009] at this stage.”

We finished with a range of wines from Clos des Goisses, the single vineyard next door and by far Philiponnat’s most well-known cuvÃ©e. First produced in 1935 (then named ‘Vin des Goisses’), they aim to make it very year, even in such difficult vintages as 2001 (one exception however, was 1984, which proved simply too challenging even for this special plot). Typically a 70% Pinot Noir and 30% Chardonnay blend, malolactic fermentation is always blocked in Clos des Goisses wines, and they are routinely aged under cork rather than crown cap closure.

As a little experiment, Charles showed us two bottles of Clos des Goisses 2009, one opened during our appointment and the other the day before. The bottle opened 24 hours previously had been refrigerated at quite a cold temperature, which “accelerates the oxidation because cold liquids dissolve more gas,” Charles explained. The warmer, just opened bottle was therefore marginally preferred.

The latest vintage, Clos des Goisses 2010, will be released this year. A short crop, Charles found it “difficult to blend everything … some elements were a bit heavy and forward.” Half of the wines were fermented in oak and it has a real vanilla and cream personality – characteristics one would expect from a Chardonnay dominant blend, which is apparently the vintage showing through.

In 2006, Philipponnat began making three single-parcel Pinot Noirs, from Mareuil-sur-AÃ¿, AÃ¿, and Clos des Goisses. We were shown the latter, Les Cintres, produced from grapes of the steepest, southernmost-facing slope of Clos des Goisses. Fully fermented in oak, with malolactic fermentation blocked, the potential alcohol level here is often over 12%. 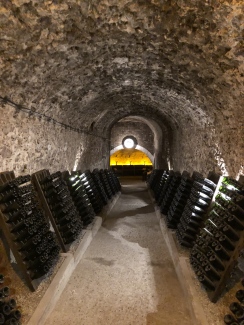 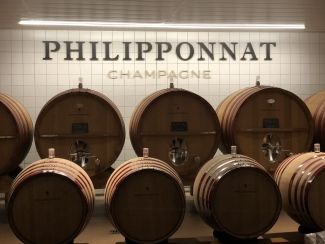 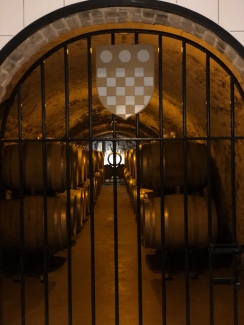 The bars are there to keep us out! 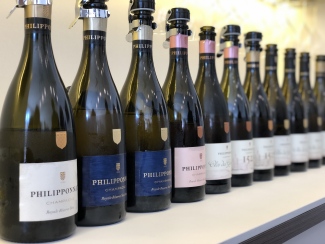 The non-vintage range will soon be transitioning to vintage 2015 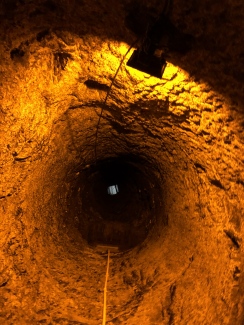 A long way up to the light from deep down in the cellars! 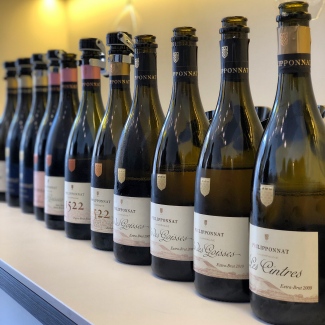